"Get Out Of Here Stalker" Guard

"Get Out of Here Stalker" guard
(Randomly named)

Get out of here, stalker.

The Get out of here stalker guard, is an unofficial moniker given by players for the Dutyer guarding the warehouse in Rostok who constantly repeats his famous line: "Get out of here, Stalker.", whenever the player is inside the warehouse and will not stop saying it until he leaves the warehouse's area. He only appears in S.T.A.L.K.E.R.: Shadow of Chernobyl.

Because of him, the phrase "Get out of here stalker" became one of the most popular memes in within the STALKER community and has resulted in dozens of comedic videos that can be seen on youtube.

Rise of the meme[]

During the unpatched version of Shadow of Chernobyl, whenever the player enters the warehouse near the entrance of Rostok from the Garbage, the Dutyer on top of the catwalks would constantly repeat: "Get out of here stalker." and would not stop until one actually gets out of there.

After subsequent patches, he was toned down a bit and only said his line once when the player was near the Dutyer, not whenever the player was in the warehouse and at a constant pace. 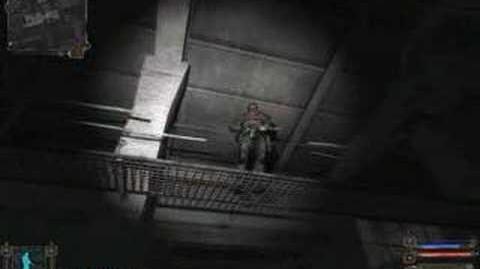 GET OUT OF HERE STALKER
"Good scavenger residing within the Zone of Alienation, I know it must be rude of me to be frank like this, but I must ask that you to vacate this immediate area."

GET OUT OF HERE STALKER! (In Memory of Stalker 2 300 Remix)
A popular example of the meme being used for a comedic remix.
Polski Русский
Community content is available under CC-BY-SA unless otherwise noted.
Advertisement