The weapon of the elite troops in the Russian army. It was designed as a replacement for the outdated Akm 74/2. Not only the Obokan's internal mechanisms but also its receiver and its barrel are movable, which decreases the recoil and increases accuracy.

Called the Obokan in Shadow of Chernobyl, it is the basic weapon of Duty and veteran Military stalkers, and members of the Monolith. The Obokan slightly surpasses the Akm-74/2 in terms of accuracy (making it the best candidate for a PSO-1 scope after the much harder to obtain Sniper VLA), but it has slightly longer reload times and starts to jam earlier than the Akm 74/2. On the other hand, the Fast-shooting Akm 74/2 has lower recoil and a higher fire rate, and is found in the early parts of the game.

It can only mount a PSO-1 scope, but it cannot mount a GP-25 grenade launcher. The Obokan has 2 unique variants: the Sniper Obokan, with an improved scope permanently attached, and the Storming Obokan, which has an integral underbarrel grenade launcher and much higher reliability.

In version 1.0006 it doesn't have the misfire_probability.k value in the game files. However, the misfire_probability value is = 0.005 (unlike other 5.45×39mm weapons which have this factor at 0.003). This means that the chance of jamming obokan is initially greater, but does not increase with the degradation of weapon in this version of the game.

The first time the player will usually be able to collect the weapon is likely from the Spetsnaz that assault Lab X-18 after the player takes the documents. It is possible for a veteran Bandit to spawn along the main road in the Garbage with a Storming Obokan[source/verification needed], but its integral grenade launcher is unloaded. There will be four waiting for the player at the entrance of the lab, each armed with an Obokan, and even more outside. Otherwise, the player can easily find it in the Red Forest and Pripyat as it is the standard assault rifle for most experienced/veterans of the Monolith faction. It is also used by most Duty stalkers at the Rostok area, although killing a Duty guard there will cause the faction to become hostile to the player, making it not specifically worth it.

The Obokan is only sold by Sakharov, Colonel Petrenko, and Barkeep.

The Obokan in mint condition can be obtained out in the open in two places:

It can be retrieved from the following stashes:

It is also used by the following characters:

Called the AC96/2 in Clear Sky, the weapon is possessed by Experienced and Veteran members of Duty, the Military and the Monolith; though some of Duty's expert Exoskeleton units use an upgraded AC96/2 (with better firing rate, ability to mount underbarrel grenade launcher and a PSO-1 scope).

The Abakan's stats are dramatically changed from Shadow of Chernobyl; now it rivals NATO class weaponry, making it a good choice for those who prefer to use 5.45x39mm ammunition without spending money on mods, or just prefer the looks of Soviet firearms. The AC96/2 has a slightly better rate of fire and accuracy than the AKM-74/2, but has a slightly lower damage value (not very noticeable, but can be a factor for those attempting to make this weapon into a sniper analogue) and handling. It can easily fit both the roles of assault and sniping. Thunderov, Gray, and Yar can upgrade it with superior accuracy or higher firing rate. It needs to be upgraded to mount a GP-25 grenade launcher, but can mount a PSO-1 scope and a suppressor by default.

Overall, the AC96/2 is a good weapon choice for a player who wants performance at a reasonable price. It can be acquired early on near the military base perimeter at the Cordon by killing one of the Spetsnaz that routinely patrol the base's area. It is the second cheapest assault rifle to repair, and compared to the NATO 5.56x45mm rifles, does not have the reliability problems and is almost as accurate. On the other hand, a fully upgraded AKM-74/2 has almost the same statistics, but is lighter, cheaper to repair and easier to obtain.

It is sold by Mitay regardless of faction alignment, although it is easier to salvage one from a fallen Dutyer, as their corpses are a common find.

A modern assault rifle developed as a replacement for the ageing AKM 74/2. The main difference is its high speed 2-round burst firing mode, which allows two bullets to be fired at exactly the same spot on a target up to 100 meters away. This significantly increases the likelihood of hitting the target in comparison to the 1 round firing mode, which considerably improves kill potential, stopping power and armor piercing capability.

In Call of Pripyat the weapon is called AC-96/2. It is given yet another boost, making it one of the best 5.45mm rifles available to the player, along with the unique Storm.

The unique two-bullet fire mode now slightly mirrors the real-life version; the first two bullets fired from the AC-96/2 (whether in the two round mode or normal full auto mode) will have identical accuracy and slightly higher speed than other bullets (instead of having a higher firing rate). Just like the AKM-74/2, the AC-96/2 can take both the PSO-1 scope and GP-25 grenade launcher as attachments, though it needs a tool-less Tier 1 upgrade for the latter, but can no longer mount a silencer, meaning it can no longer used for stealth purposes. When scoped and with the semi-auto firing mode selected, the AC-96/2 can serve as a makeshift sniper rifle. A key downside to using it early on is the repair cost, which is double that of the AKM-74/2U.

The rifle is fairly common in Yanov, being used by Duty stalkers, but one can be salvaged early in the game in the Zaton sawmill, where a single zombified soldier will always carry it. It can also be occasionally found in Hawaiian's offer if the player is neutral or sides with Duty. It is commonly sold by Owl, and is also a standard weapon for the Monolith faction, and is occasionally wielded by Loners. Scoped AC-96/2s are used by Klimenko, Valentyr, Podorozhny, Rogovets, Smirnov, Sokolov and Skelya. Since Skelya and Klimenko are scripted to die during the storyline, the weapon can be collected near their body. Valentyr and Podorozhny may die in both the Mysterious Weapons and Evacuation quests, and Sokolov, assuming he survived the Jupiter Underground, can be killed in Shattering the Monolith and Evacuation as well, though having them die is not worth it as the weapon is likely not to be useful at this part of the game.

The AC-96/2 can also be found in a secret stash in Yanov, along with a PSO-1 scope and 180 5.45mm rounds. The stash is located just outside of the east entrance to Yanov station (the entrance that faces Zulu's tower). Directly in front of this entrance, you will see a building with stairs on the left side. Look in the desk beneath the stairs to claim the goods. Another is stashed in Pripyat, in a staircase going down in an apartment building, to the north-west of the Yubileiny Service Center. 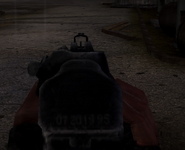