Assault rifle with a folding butt, 1974 model, uses 5.45x39 mm ammunition. It is a simple and reliable weapon, but the cheapness of its production affected its ergonomy and accuracy. In the zone, it is the main weapon of the military stalkers and of many solo fighters.

The Akm 74/2 is invariably the second assault rifle one will encounter, after the Akm 74/2U. It's cheap to buy, and it's easy enough to find in the field. The Akm 74/2 is a lower mid-range weapon, with decent power, but poor accuracy for a rifle.

It can make short work of bandits and weaker mutants. It can be fitted with a PSO-1 Scope and a GP-25 Kostyer, but not a silencer. The soldiers attacking Mole's group in Agroprom use Akm 74/2s.

A unique variant, called the Fast-shooting Akm-74/2, can be found in Strelok's stash in the Agroprom Underground. It has an increased rate of fire, increased durability, and reduced recoil.

There's an AKM-74/2 with a GP-25 Kostyer grenade launcher attached to it inside the locker room in lab X-18. One can also find two grenades for the GP-25 in the same room in an other locker.

The weapon can be obtained from the following stashes: in Agroprom (Stump with hole), in Dark Valley (Forgotten chest), in Garbage (Storage of the Strelok faction).

The Akm-74/2 is a widely used weapon by most of the Zone's factions, except Freedom and the Ecologists, who prefer Western weaponry, and Duty, who usually use the more modern counterparts such as the Obokan.

In Clear Sky, the AKM-74/2 receives an upgrade in that it's more reliable and can now rival the stats of NATO weaponry, unlike in Shadow of Chernobyl where it greatly loses out on damage. It also has the cheapest upgrades compared to all assault rifles, with all tier 1 upgrades costing only 1,600 rubles.

The weapon, however, is prone to durability damage, and accuracy at long range remains poor. The rifle must be upgraded to mount both a PSO-1 scope, as well as the GP-25 grenade launcher. One notable change from Shadow of Chernobyl is the ability to add a silencer, this however severely degrades its already average damage and accuracy.

Comparing it to its cousin the AC96/2, it has slightly better damage and handling, but is less accurate and has a lower rate of fire.

Virtually every faction in the zone uses this weapon (with the exception of the Ecologists), most experienced members of a faction use this as their weapon of choice.

This weapon, designed in 1974, signaled the adoption of small caliber and low impulse rounds by Warsaw Pact countries. A descendant of the most popular assault rifle in the world, the AKM-74/2 has an even bigger muzzle brake, resulting in a reduction of what was already manageable recoil. This facilitates better accuracy and groupings, especially when fired in fast single shots or bursts. As before, the rifle is very simple and reliable.

In Call of Pripyat the AKM has been somewhat nerfed and now fulfills the role of the AKM-74/2U's bigger brother, with slightly worse (but still very good) handling and better everything else, including the ability to attach both a grenade launcher and a PSO-1 scope, though the latter needs a (tool-less) upgrade.

It is also more reliable than the AKM-74/2U, and can be modified to use the slightly more effective 5.56×45mm ammo but at the cost of durability.

It is an effective replacement for the starting AKM-74/2U, as it can be found in one of the first missions, The Hit (where it is used by the Bandits strike team), and can be easily found from random NPCs as the weapon is used by most factions in the Zone.

However, one may find the use AKM-74/2 very short as Nimble can get the player the "Tunder" 5.45 rifle as soon as one can afford ordering it from him. If the player ends up going to the Sawmill for the basic tools for Cardan, one might end up picking up a AC-96/2 from a zombified stalker in need of only a minor repair.

It is used by every faction in-game, usually rookies and experienced members.

The AKM's upgrade tree is centered around it making it either more accurate or increasing its fire rate, and either more maneuverable or durable. It must also be modified to mount PSO-1 series scopes, although the modification itself does not require tools to be given to a technician.

It is also the only 5.45x39mm rifle to have the option of being able to chamber 5.56x45mm rounds, although this mod requires the basic tools.

After fully upgraded for accuracy, it's a very good weapon for mid-close combat, capable of killing quite fast enemies with even good armors, but still player needs to achieve headshots to quickly kill exoskeleton wearing NPCs. However, recoil is a problem when aiming with PSO-1 scope, but it can be avoided by shooting in short, 2- or 3-shot bursts. With its good reliability, the AKM may be a good choice to take it to Pripyat.

In the early builds, the AKM had a very different model and texture. It had a wooden furniture, a fore grip with a grenade launcher, and a different stock. This model has been used until 2003. Around 2004, the AKM had been given the final mesh as seen in Shadow of Chernobyl, but it had a different texture. It had a brown/grey plastic furniture. Somewhere around 2006, it had been given the final texture with the dark green furniture.

The AK-74 in build 1935, note the brown synthetic furniture

The original Kalashnikov as seen in Build 1154

World model as seen in all games. 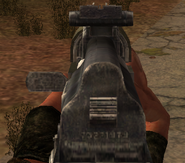