The weight and size of the Akm 74/2U are similar to those of a submachine gun, but its operation mode and the ammunition it uses place it into the class of assault rifles. Its advantages are its small dimensions very useful when fighting inside a building or in a thick forest and a relatively high piercing capabilities. Its main disadvantages are a limited accuracy range and quick overheating when firing bursts.

In Shadow of Chernobyl, the Akm 74/2U is overall underpowered. It has the lowest accuracy and damage rating for any assault rifle in the game, but it is light due to its compact nature, and boasts very good handling, coupled with an above average rate of fire. These two advantages make this weapon the most easy-to-handle rifle in the game, as even when firing at full auto, the weapon remains largely easy to control at close to mid range. It is also rugged like the Akm 74/2U and starts to inconveniently jam only when 1/3 damaged. Regardless of its shortcomings, it is a very useful as a player's first fully-automatic weapon. It's caliber also allows it to punch through light and medium armored enemies.

It is the earliest assault rifle to acquire, and possibly the easiest to get. It is held by Major Kuznetsov in the Cordon, along with all of the military stalkers in the area. It is a valuable weapon at this early point in the game.

The weapon is quite widespread and most popular among experienced Loners, Military units, and Bandits. It is also used by Strelok in all cutscenes.

The AKM-74/2U is considerably less accurate than it was in Shadow of Chernobyl when not upgraded and somewhat lacks reliability and overall stopping power, though it's cheap and easy to maintain and upgrade and is reasonably useful and powerful. The AKM-74/2U does not have many upgrade options as it can only be upgraded for either better firing rate/less recoil or better damage/accuracy, though not to the extent of regular assault rifles. All in all though it is a good starter weapon with its light weight, reasonably strong stopping power and deadly armor piercing ammunition capable of tearing through most of the enemies the player will encounter in the early parts of the game.

The weapon is commonly carried by rookie members of most factions. It is usually first seen being carried by Military grunts in Cordon.

Despite being similar to submachineguns in size, weight and tactical purpose, this weapon is classified as an assault rifle due to the fact that its internal mechanism is identical to that of the AKM 74/2. The weapon is notable for its mobility in close quarters and high armor-penetration capacity, while its drawbacks are its short effective range, despite the relatively long bullet range, a tendency to overheat and high ricochet propensity.

It has massive recoil and its overheating problem is represented by atrocious durability. The AKM-74/2U degrades quite fast, even when it has the right upgrades. When fully upgraded however, it can be a fairly effective CQB weapon, but the common AKM-74/2 is better in nearly every way, and both are outclassed by the unique Storm or the common AC-96/2.

It has a fair amount of fire rate and recoil upgrades. With the right upgrades, it can be turned into a devastating weapon at close range, as it has a fairly high damage, powerful caliber and quite large mag capacity (can be upgraded to 40 rounds), as well as upgradeable fire rate (over 800 rounds per minute). Dropping such an upgraded gun in front of a stalker's feet can turn them into a proper bullet hose. This offers a comparatively cheap way to improve the firepower of friendly stalkers such as Lt. Sokolov during the Jupiter Underground and the following missions in Pripyat, particularly once the Calibration tools have been acquired.

The player starts the game with a slightly damaged AKM-74/2U. Loners, Duty, Monolith and Bandits rookies will default to it as the Warsaw Pact weapon, making it one of the most widespread guns in the Zone.

World model in Shadow of Chernobyl.

World model as seen in Clear Sky and Call of Pripyat.

World model with a mounted silencer.

The weapon with a mounted silencer. 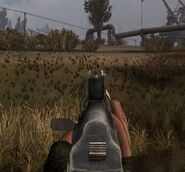 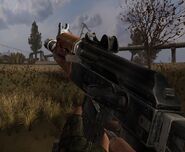