The Agroprom is a major area in S.T.A.L.K.E.R.: Shadow of Chernobyl and S.T.A.L.K.E.R.: Clear Sky. The name is used by stalkers to refer to the entire area, rather than just the institute itself.

A strange, heavily contaminated area, Agroprom is home to the Agroprom Research Institute and a factory, connected to the outside world via railway tracks. It's notable for it's extensive network of underground facilities, corridors and other areas. To the north-west lies a shallow lake, chocked full of abandoned equipment and other debris.

Following the 1986 incident, the Research Institute was created to analyze the possibilities of agriculture on radiated soil, apparently either as a sister facility to the Dark Valley science center or a replacement for it after the construction site was abandoned.

The Agroprom is made up of two major and one minor areas of interest to the player:

The Agroprom Research Institute is dominated by Military in Shadow of Chernobyl. Once the player enters the Agroprom Underground outside of the factory, clears the tunnels and emerges in the research institute, the military will attack him. One the player clears out the military and/or runs, Bandits will attack, then stalkers a few days later. Whoever wins the fight will occupy both or one of the structures, and defend it from occasional attacks from military forces and more bandits. Mutants in the form of Blind Dogs, Boars, Flesh, and Pseudodogs roam the area. The first time the player goes there, there is one Bloodsucker, but in later visits, there are a few underground and even one on the surface.

In Clear Sky, Agroprom is shared by both Loners and Duty. In the surrounding area there are Snorks, Blind Dogs, Pseudodogs, Bloodsuckers, and a lone Pseudogiant. 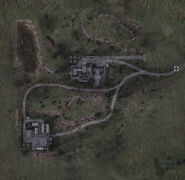 Map of the area, used in Clear Sky and Shadow of Chernobyl. The area is absent in Call of Pripyat.

View of the Duty base in Agroprom during Clear Sky. It is taken over by the Military in Shadow of Chernobyl.

The Loner which usually appears at the Agroprom entrance