Major
Colonel (in the ending)

Alexander Alexandrovich Degtyaryov was born in Pripyat in June of 1978 and hence was among those forced to evacuate and leave his hometown at the age of seven years due to the Chernobyl accident. After the Second Disaster, he returned to the Zone as a Stalker. His experience and skills significantly contributed to his being recruited as an undercover agent of the USS (Rus. SBU).

During the events of Call of Pripyat, Degtyarev is operating in the Zone as an undercover Free Stalker. His mission is to investigate the failure of Operation Fairway. Unfortunately, he is unable to communicate with his superiors, prompting him to conduct his investigation independently.

At the end of the game, he is promoted to the rank of Colonel but turns down the desk-work position in favor of being stationed at the Zone as a 'permanent observer.'

Degtyarev is the only playable character for the entirety of the game. His initial mission in the Zone is to find out what happened to the five Military Stingray helicopters that were involved in the initial stages of Operation Fairway. This leads him to identify the causes of Operation Fairway's failure as a whole. To maintain his cover, Degtyarev is inserted into the Zone with little more than the atypical Sunrise bodysuit, a weathered AKM-74/2U assault rifle, and two weeks worth of food and supplies. From the moment the game begins, what Degtyarev does is up to the player - unlike the preceding games, much of the plot is left up to the player's actions.

After identifying the causes of the helicopter crashes, the player learns of three pre-planned evacuation locations - one in Zaton, Yanov, and Pripyat. Finding the sole survivor of Stingray 4, Lt. Sokolov, the Major realizes that remaining survivors have somehow made their way to Pripyat, opting to be evacuated from there. His next mission is to discover a traversable route through to Pripyat itself. He does this while at the same time aiding the local Ecologist mission, putting him into direct conflict with the Mercenaries operating in the northern sector of the Zone. After discovering a vast underground tunnel network underneath the Jupiter Factory, he assembles a squad to assist him in the journey alongside equipping himself and his squad-mates with closed-circuit respiratory suits.

His team can be made up of as many as four men depending on his actions up until this point: Zulu, an ex-Duty hermit; Vano, a happy-go-lucky Loner; Sokolov; and Strider, a Monolith defector. Once assembled, the squad makes their way through the underpass, where they fight through waves of Snorks and Monolith forces before finally surfacing in Pripyat itself. They are immediately confronted by Captain Tarasov and other Military survivors, forcing Degtyarev to reveal his identity to diffuse the standoff. Most of the team is shocked; in particular, Zulu leaves in disgust. Despite this, the other Stalkers shelter with the Military unit holding out inside the Laundromat.

In Pripyat, Degtyarev reports to Colonel Kovalsky, the commanding officer of the survivors. He assists the Military in operations against the Monolith, securing a yet unidentified weapon leading to Degtyarev having to investigate the weapon's origins and functions and leading to the discovery of the abandoned clandestine Project 62. Degtyarev then investigates an underground laboratory in Zaton, uncovering documents referring to another underground facility Lab X-8 in Pripyat. He returns to the dead city, uncovering more information on the experimentation performed by C-Consciousness prior to the events of Clear Sky. Mortified by these discoveries, Degtyarev and Kovalsky prioritise turning over their findings - documents and all - to the Ukrainian government. At the same time, the Military's numbers in Pripyat continue to dwindle due to mutant attacks and Monolith skirmishes with a large impending emission threatening to destroy their outpost. However, Degtyarev locates and destroys a signal jammer set up by the Monolith, allowing Kovalsky to reestablish communications with HQ and radio for evacuation.

During the evacuation, the Major and any other survivors up until this point are joined by Strelok, who has been fleeing from Monolith forces. The main goal of the evacuation becomes ensuring Strelok's survival in the face of a small army of zombified Stalkers and the remaining Monolith bastion in the city attempting to kill everyone. Once the evacuation is complete, the player is given the option to either join the other survivors in escaping or to remain in the Zone.

Regardless of the player's choice, the Major leaves the Zone wherein he is promoted to Colonel for successful investigation. Degtyarev however declines his new posting in favor of returning to the Zone as a 'permanent observer' for the Security Service of Ukraine, essentially allowing him to remain a Stalker. 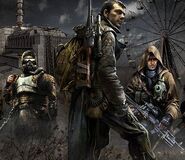 Major Degtyarev depicted in the official S.T.A.L.K.E.R. website. To his left is Strelok with his unique suit and to his right is Mercenary Scar.