A deserted army base next to a dilapidated hamlet and a small marsh. The village is an eerie place literally swarming with mutants - the bloodsuckers alone are legion. Stalkers do their best to keep away from it, even if it means going extra kilometers around it. The anarchists from the Freedom faction have settled down in the army base. The road connecting the base to the Zone is guarded by the Brain Scorcher, which blocks the way to Pripyat and the Chernobyl NPP.

A strategically important area, the vicinity of the army base used to contain a small rural village and passageway to the radar facility north of it. After the 1986 incident, the population of the village was evacuated and the base repurposed to act as a center for military forces securing the Zone of Exclusion. Following the fall of the Soviet Union, Ukrainian State Security Service units were garrisoned in the base, continuing the mission of securing the area. It is unknown if there was any significant relations between The Group and the military garrison.

Some time before the second incident in 2006 a large scale construction effort was started in the area. However, the incident cut such efforts short; workers abandoned their vehicles, leaving behind their vehicles and raw supplies. The area became truly abandoned, with mutants and other wildlife quickly moving in. However, once the military was able to reach deeper into the Zone, they once again reoccupied the warehouses and erected The Barrier, to keep the more gruesome Zone abominations and the Monolith faction contained. They were doing a decent job, right until the Second Emission, during which much of their force was killed. The soldiers retreated to the military base and bunker down, constantly requesting evacuation to no avail.

Freedom exploited their weakness and secured the base for themselves, as well as picking up the duty to maintain and defend the Barrier. After losing their primary base in Dark Valley, the army warehouses area became the center of Freedom operations and one of the most heavily defended locations across the entire Zone.

The Army Warehouses can be accessed at any time from the Rostok area, although there are no storyline missions here and the player will have to go through the area in order to access the Red Forest.

The Army Warehouses serve as the main headquarters for the Freedom faction, which settled in the abandoned military base. The Freedom members mostly gather in their base, and a small contingent can be found protecting the Barrier, with Murk's team standing near the abandoned village.

A small group of renegade Duty experts, led by Colonel Skull and known as "Silence", reside in the farmstead west of the Freedom base. The player will first encounter them ambushing a Freedom patrol on their first trip to the area, and they will gather at the farmstead. The player can choose to aid Skull and his squad in a quest to clear the Freedom base and eliminate Lukash, after which they will return to their camp remain there for the rest of the game (although they will most likely die by the Electro anomalies beside the farmstead). Alternatively, the player can denounce Skull to Lukash, who will send out a Freedom strike team commanded by Max to eliminate the threat. Otherwise, if the player doesn't convince both factions, Skull will strike the base on their own.

The Monolith faction maintains a small presence by the Barrier. If the player successfully completes two of Lukash's quests and undertakes a mission to aid the Freedom contingent at the Barrier, a group of 20 Monolith raiders will attempt to raid the barrier and take control of it, and will respawn until they are all eliminated. After that, the Barrier may be attacked by mutants, usually pseudodogs, boars and fleshes.

The area is also occupied by Mercenaries who have an outpost in the north-western part of the area. Mercenaries sometimes patrol the northern roads, but they are likely to be eliminated by other factions on their way. Loners maintain a small presence in the area, after Skull and his team have been eliminated, gathering at the farmstead and occasionally exploring the village. The said village is swarmed by Bloodsuckers and occasionally Controllers.

There is also a small marsh to the east. The marsh is surrounded by a mine field, and is the home to an insane stalker.

The Army Warehouses return in Clear Sky. The area is accessible from the Red Forest and the Garbage, although the access from the Garbage will only open after the player has completed the main quests in the area to proceed.

For the most part, the layout of the area remains the same, although the occupation of the area has changed. The military base is now home to a group of veteran and expert soldiers who were trapped there by the Second Emission that begins the game, and are surrounded by Zombified Stalkers. Freedom still holds a large presence in the area, guarding the two entry checkpoints, as well as the camp on the hill beside the Barrier. Squads of Loners occupy the northern farmstead, as well as the Barrier, where they will guard the area against regularly sent hordes of Monolith soldiers. One can possibly find a Duty squad in the central part of the map, and Hog along with his mercenaries can be found in the southwest part of the village. There is little mutant presence here, usually limited to bloodsuckers and later pseudodogs and blind dogs in the village.

The player will have to travel to the area in order to speak to Hog to find out what happened to Leshiy. After the player hands Forester back his compass, the player will have to raid the military base along with a Freedom squad leader named Kostyan, to use the base's emitter in order to transmit to Leshiy the coordinates to get out of the Space Anomaly they've been trapped into, allowing him to open the way to Limansk.

The Monolith is still present in the area, gathered at the Barrier, where they will regularly launch raids to break through the Barrier. There is also a squad of expert Monolith soldiers guarding a helicopter (which contains a box with the side quest item Accumulators) just to the southwest of the Barrier, and one must expect a heavy psychic aura surrounding it.

The marshes that are located northeast of the military base are filled with heavy pockets of Gas anomalies. If the player undertakes on a mission to find a Meat Chunk artifact and enter the chemical-filled tower, they will be surrounded by two Controllers; one by the door, and another just by the entrance to the building.

The Army Warehouses can be seen in the intro cut scene, where a military guard is about to be evaporated by the First Emission in 2006.

It is mentioned again in Vano's good ending in which he travels to this area and is accepted by Freedom, which supports they still have control of the area. 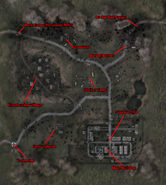 Wolf at the Army Warehouses

Artifacts at the Military Warehouse