The Berill-forces is an official suit used by the Ukrainian Military, modified for the Zone. It includes a PSZ-9a military bulletproof vest with beryllium coating and a Sphere-08 helmet. It features a European woodland camouflage pattern. The helmet has a special copper wire mesh installed to protect the wearer from background psionic emanations of the Zone. All wearers either use the gas mask or goggles variant of the helmet.

The Berill-5M suit is exclusively used by the Spetsnaz.

In Clear Sky and Call of Pripyat, the Freedom faction uses its own variant of the Berill suit. Known as "Guardian of Freedom suit", it offers effective anomaly protection, compared to the original model, and features a pattern similar to the German Flecktarn camouflage, similar to the camouflage used by Freedom suits.

In Shadow of Chernobyl, the Berill is a particularly durable suit and very resistant to firearm damage. Its only drawbacks are its below-average anomaly protection and weight. It is equipped with first-generation night vision. It is effective as a starting suit as it can be easily bought from Barkeep (although it costs no less than 50000RU) or found in the open.

The Berill-5M is designed for combat; while not as superior to other Tier 2 armors in terms of firearms resistance compared to its Shadow of Chernobyl incarnation, it is still comparable to the Guardian of Freedom and CS-1 body armor in term of bullet/rupture protection and can be modified to have a maximum of 60% protection against firearms though if modified for anomalies: It won't go above 35% and it will lack NVGs. Overall it's better to use it if you're combat oriented and compensate for the lacking anomaly protection with artifacts.

Overall the Berill-5M doesn't provide as much anomaly protection as comparable Tier 2 armors (the Guardian of Freedom or CS-1), but costs less and is cheaper to upgrade and maintain.

It can be upgraded with NVGs and have superior firearm protection or superior anomaly protection. Can have a maximum of 3 artifact containers.

The Berill-5M commonly costs around 18,800 rubles, making it economical and hardy compared to other high level armors. It is bought and regularly available from most traders.

The Berill offers good hit protection and armor, and is generally effective as a starting suit. Due to the fact it is available from Owl at the starting of the game, it is a good option to purchase it if the player is looking for effective armor protection. However, its price (18000RU without discounts), its lack of artifact slots and mediocre anomaly protection (it does not provide any psi protection) make it ineffective as a general purpose suit, and it is outclassed by the CS-3a armor available with a helmet from Nimble for 40000RU, or the Skat-9 military armoured suit available for free from Kirillov.

It is sold by Owl at the beginning of the game. After completing several missions for Beard, it becomes rare and is generally replaced in Owl's stock by Exoskeletons and Skat-9 suits.

Being a low-end suit, the Berill-5M has only three upgrade paths. Oddly for a combat armor, the only bulletproof upgrade is Tier 3; other upgrades are anomaly and utility (health, bleed, etc.) as well as weight reduction and carry upgrade. As a final nail in the coffin, the Tier 3 upgrade which is supposed to add two artifact slots is bugged and doesn't work in 1.6.02 due to a bug in the configs file.

Behind the scenes Edit

In the first builds (most notably Build 1154, the first functional gameplay build), the armour uses the design for Jeffry, apparently a space marine of sorts. While the texture and model was used as a placeholder, the overall design of the marine was later reused in the final armour.

The beta model of the Berill suit is slightly different from the model used in the final version of 'Shadow of Chernobyl' game. The original beta design made use of an olive drab woodland camouflage pattern on the boots, helmet and overall gear similar to the ones used by regular military grunts and also incorporated a camouflaged back-pack while the current one does not make use of one.

The Beta design of the Berill 5M. Note the different camouflage pattern. 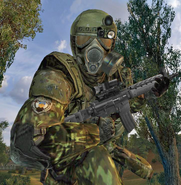 A patrol of Spetsnaz operatives in the Cordon. 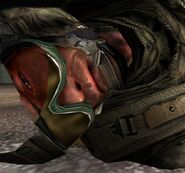 Shadow of Chernobyl Berill suit
Add an image to this gallery
Retrieved from "https://stalker.fandom.com/wiki/Berill-5M_armoured_suit?oldid=72191"
Community content is available under CC-BY-SA unless otherwise noted.