A real gun for real heroes. It is big, heavy and very destructive. It is not very popular in the Zone due to its price and size. After all, you don't go hunting for elephants every day!

A Black Kite can be found on Gordon Freeman's body in the Wild Territory, however it probably won't be in perfect condition. Depending on the game version, it also may be possible to buy one from Duty. The Black Kite sold by Duty presumably belonged to a mercenary named Hog, who appeared in S.T.A.L.K.E.R.: Clear Sky. Black Kites can also, rarely, drop from crates that more commonly drop grenades in and around CNPP.

The Black Kite is a more exclusive and rare weapon in Clear Sky. The experts group of Bandits in Limansk mostly use a Black Kite as a sidearm. Kostyan and Hog are known to carry one of these pistols. Alternatively, one can either join the Bandits and buy it from Tooth or do enough jobs for the Bandits and wait for the job that requires the "Modified shooter", a fully modified Desert Eagle with its initial stats boosted. One other way to get it is to kill all Bandits at their base until the base door opens, and kill their leader, Yoga, or Senka, as they both carry the weapon. The Black Kite may also be found in the Garbage but this is rare. The Black Kite maybe found in the hands of a dead Bandit member in the Depot, but it is rare to the side-arm in the hands of one of the Bandits in the Depot. 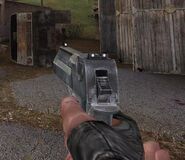 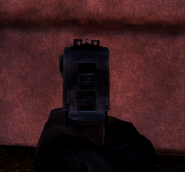 The Black Kite's world model as seen in all games 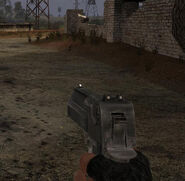