A Blind dog is a type of mutant appearing in S.T.A.L.K.E.R.: Shadow of Chernobyl, Clear Sky and Call of Pripyat. It is one of the fastest enemies in the series, yet is rather weak and easily disposable.

Several generations of the dog species have lived and died since the catastrophe. Each was more affected by the Zone than the previous one. Rapid mutation lead to a vast improvement in previously peripheral abilities, frequently at the expense of primary ones. The most notable biological change was the loss of sight, paired with an uncanny development of smell. As it turned out, blind pups survived in the Zone as well as normal ones, if not better. As a result, the common dog quickly became extinct in the Zone, giving way to a new breed – that of blind dogs. The animals instinctively identify and avoid anomalies, radiation, and other invisible dangers that plague the Zone. Like their wild ancestors – the wolves – blind dogs hunt in packs. An encounter with a large group of these animals can be dangerous even to an experienced and well-armed stalker.

As the name implies, these dogs have lost their eyesight, possibly due to some form of warped, mutation-induced evolution. Rather than rely on eyes, Blind Dogs have extremely keen senses of hearing and smell and can hunt, fight, and navigate through both pockets of radiation and fields of anomalies without much problem. They also seem to have developed an unusually high resistance to electricity. Perhaps due to radiation in the Zone and subsequent mutations, many Blind Dogs are albino.

While in theory second-weakest mutants in the game after the Flesh, packs of Blind Dogs should not be underestimated - like Fleshes they hunt in groups, but unlike Fleshes they are both small and fast targets, making them difficult to hit. They also have higher "morale" and don't run away as easily, and their constant attacks, though weak, will interrupt your sprinting as you try to run away.

One way of dealing with Blind Dogs is finding high ground - in Shadow of Chernobyl they can't jump at all which means any rock is a safe haven. In Clear Sky and Call of Pripyat the player can also "run for the hills", just pick higher ones so their jump can't reach you. When surrounded in an open area, kill several as quickly as possible to break the horde and then sprint away. In Clear Sky the Blind Dogs cannot enter thickets of bushes, they will circle the thicket and try to enter and attack. The player can safely hide in a thicket and kill the dogs as they try to enter. Not all of the dogs in the pack will attack at once, so the player will have to run out of the thicket and entice the remaining dogs back to the thicket.

Due to their speed and small size, the best window of opportunity for dispatching blind dogs quickly, is when they run directly towards the player for the kill, giving ample opportunity for delivering headshots, and dealing enough damage to either kill the dog outright, or cause it to retreat.

Blind dogs can be found in almost any area of the Zone but they tend to be most dominant in the Cordon, Wild Territory and Army Warehouses. In Shadow of Chernobyl, a fairly large pack of dogs have made a nest just outside Rostok. The pack outside Rostok is most ferocious and dangerous to take on and the best tactical manouver is to try outrun the pack till you reach Rostok's gates or trying to sneak past the pack when its attention is fixed on something else.

Except in Limansk and the Chernobyl NPP area, both of which are Monolith controlled territories, blind dogs appear in all territories.

Blind dogs can be commonly found throughout all game areas that are not underground. These blind dogs hunt Fleshes and unsuspecting Stalkers, are sometimes found hunting with Pseudodogs, and tend to be the most numerous mutants in a Controller horde.

In early 2002, it was planned for the blind dogs to be an intelligent, sapient race that evolved extremely quickly due to the Monolith evolutionary module. 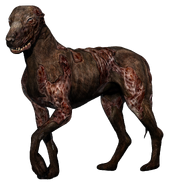