Bloodsucker Lair is a side mission featured in S.T.A.L.K.E.R.: Call of Pripyat.

This mission is given by Grouse part of the way through the Missing Stalkers mission, when he meets the player outside the sewage pipe in the Swamp after they both exit the Krug Antenna Complex. Grouse is concerned about the safety of stalkers now that he and the player have discovered a lair of Bloodsuckers. He tells the player to inform Beard and the rest of the stalkers at Skadovsk about the discovery.

Once back at Skadovsk and informed of the threat, Beard suggests that the lair be filled with poisonous gas. He points the player to Owl for more information, saying he's not exactly on speaking terms with the man at the moment. Owl will provide the required information for 2000 RU. It would be helpful to leave a lot of carry weight free - there is some heavy lifting and nice loot to be had in this mission. At least ten kilograms of space should do it, or a Hercules drug. Note that paying Owl for the information is optional, although obviously a player playing the game for the first time would be not aware of the location unless they would find the convoy while exploring the area.

Owl's sources say that a military convoy carrying a deadly nerve agent stalled in the middle of the bridge out of the Ranger Station. It is quicker and easier to approach the bridge from the Ranger Station to the north and head south than enter from the south by the Waste Processing Station and head north. Vortex anomalies are all over the bridge, so the player must exercise caution or be dragged into the explosion, or even worse, thrown off the bridge.

The first vehicle (last in the doomed convoy) encountered heading south from the Ranger Station has a trunk behind the rear seat. Inside are two documents (Internal order No. 423 and Order No. 562) and a key. After taking both, the mission will update: another key is required. The document details the location of both keys and all three documents. Climbing the nearby ladder and hopping up to the giant brown pipe will help the player avoid the majority of the anomalies. There is a small amount of radiation, but sprinting through it quickly is effective.

The second vehicle (second last in the convoy) is by a pile of old pipes dumped on the bridge. There are some medical supplies in the rear. The two BTR-70 APCs have open hatches on the bottom, and house a box of 9x39mm SP-6 and an AKM-74/2. The truck is the main objective. In the front passenger seat there is another copy of the document with details on the convoy. In the back of the truck is an AKM-74/2U leaning on a giant box. This is the box that requires the keys.

Further south of the truck is another vehicle (second vehicle in the convoy) leaning precariously over a shattered portion of the bridge. The trunk in the back holds a giant stockpile of 5.45x39mm ammunition. The shattered part of the bridge here actually collapsed, and looking down the chasm, there is a vehicle resting upside-down near the creek (the first vehicle in the convoy). Slowly dropping onto a nearby broken beam and and following it down is the quickest way to the vehicle. Once down, the box inside the car is easy to see, sitting on the inside of the roof of the overturned vehicle. The box holds the second key and another copy of the document. To get back up to the bridge, players can sprint up the steep hillside and up around to the bridge. If the mission Mercenary Camp has not been completed yet or the Mercenaries are still holed up in the Waste Processing Plant, it would be wise to avoid entering the premises of the plant by accident. Getting back to the truck from the south going north is a matter of closely skirting the edges of the chasm the player so recently climbed down, so as to not get caught in numerous vortex anomalies.

Inserting both keys into the box will unlock it and give access to the Perin B3 canister. Weighing in at 10 kg, the canister is one of the heaviest items in the game. Plus the giant pile of ammunition from the second vehicle in the convoy, there is little shame in using a Hercules drug here to carry all of it. It is also strangely worth noting the canister can be dropped unlike most mission items.

The time has come to destroy the lair. The player must lug the canister over to a small lot behind the Krug Antenna Complex and hook it up to a pipe inside a small open panel. The pipe can be hard to point at: it points down inside the small panel. After connecting the canister, the much easier to spot red valve must be spun.

Immediately after spinning the valve, a loud roar shakes the earth and a 45-second timer begins. It is advisable to take cover behind the nearby hill and watch the enemy detection bar while the wait takes place. Bloodsuckers will try to escape the building and head towards the small lot the player is in. Two Bloodsuckers will then appear. A fight may ensue, but standard Bloodsucker tactics apply. The player can also simply leave the area, and the two mutants will simply remain at the area until they are killed by the player.

After the timer is up, the player should head back to Beard and inform him of the lair's destruction for the mission complete.

Beard will reward the player 5000RU, a Veles detector, and coordinates to a stash contaning a SIP-t M200, ammunition and various supplies under a rock near the gas station. Completing this mission will also give the player the good ending for the Skadovsk when they complete the game.

The documents found within the convoy can be sold to Owl for 2400RU. 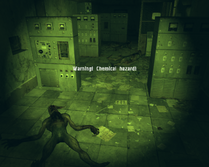 The lair after being gassed

Alerted bloodsuckers within their lair
Add an image to this gallery
Retrieved from "https://stalker.fandom.com/wiki/Bloodsucker_Lair?oldid=68241"
Community content is available under CC-BY-SA unless otherwise noted.