"Bloodsucker village" is the colloquial name for the remains of a small settlement just north of the compound in the Army Warehouses area. The name comes from the fact that the place is often overrun by bloodsuckers (and occasionally other mutants such as controllers).

In Shadow of Chernobyl, the player can receive a quest from Skinflint or Murk with the objective to clear out the mutant threat from the village. After the quest has been completed, Stalkers do sometimes visit the place. It should be noted that the Bloodsuckers respawn, like all other mutants.

When entering the area from the south, three Freedom Stalkers can be seen, one of whom is Murk. Murk and his comrades usually die eventually from Bloodsucker or pseudo dog attacks. Controllers will spawn in the village occasionally. This was rare in early versions of the game but has had its likelihood increased with patch 1.0005. Expeditions into the Bloodsucker village depart regularly from the old farm across the road, usually with groups of seven or eight stalkers. It is not confirmed whether this happens before finishing the village quest. If taking the quest from Skinflint, Murk and his two friends will likely die sooner or later.

There are six stashes in the village and its immediate environs.

View from the tower.

These two dead freedom units you will find by the tower in bloodsucker village. 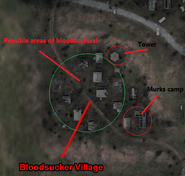 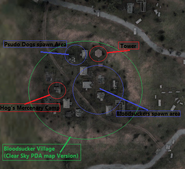 Bloodsucker Village (Clear Sky) map
Add an image to this gallery
Retrieved from "https://stalker.fandom.com/wiki/Bloodsucker_village?oldid=60586"
Community content is available under CC-BY-SA unless otherwise noted.