Psy-emitter
The Brain Scorcher is a former military installation that was seized by the Group and became the first major application of mind control technology in the Zone.

While superficially appearing as a massive radar installation, the Scorcher was from the beginning, created as a massive mind-altering antenna, designed to suppress aggression (codenamed Rainbow). Its design was created in Lab X-8, in Pripyat[1].

After the Soviet Union's dissolution, the Group continued the research started in Lab X-8 and adapted the installation at the Scorcher, most importantly, Lab X-19 located in an old bunker underneath the facility.

When the Zone was created, the Scorcher was activated by the Common Consciousness in order to obstruct the way into the center of the Zone. The psi-emissions generated by the installation were effective at mind controlling trespassers and subjecting them to the will of the collective, creating mindless zombified stalkers out of some and raw recruits for the Monolith faction.

In Clear Sky, Strelok acquires a psi-protection helmet given to him by the Ecologists in Yantar, and travels to the Chernobyl Nuclear Power Plant, without shutting down the Brain Scorcher.

In Shadow of Chernobyl, Strelok, using the psi-protection helmet given to him by Professor Sakharov, enters Lab X-19 and proceeds to deactivate the Brain Scorcher. After the Brain Scorcher was deactivated, word spread quickly and many Stalkers of different factions started to move to the center of the Zone, under the presumptions that there was a Wish-Granter or a treasure trove of artifacts waiting there.

The controls to the Brain Scorcher were installed deep within Lab X-19, an old Soviet bunker filled with many generators and other machinery.

Members of the Monolith faction are deployed on all of the roads in the Red Forest, leading up to the Brain Scorcher and Pripyat. Alternatively, instead of the direct route via the road, one can also take the forest route, but it is filled with pockets of radiation and anomalies. Dangerous mutants and Zombified Stalkers also inhabit the area, making this area hazardous to travel through.

The entrance to the lab is hidden in a very large and well defended base. The external base has only two entrances; the road to the main entrance is guarded by a Monolith sniper. The other entrance is a blown out wall surrounded by radiation levels that are off the charts. Both entrances are guarded, and all areas around the base are monitored by snipers.

The antenna complex. Only 4 of the emitters are functional, while the one on the far-left is nonfunctional and leans slightly.

A maintenance box under one of the emitters.

A scale-model replica of the Brain Scorcher found in Lab X-8 in Call of Pripyat. 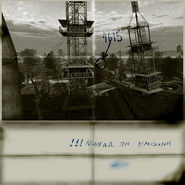 A cut intel photo from S.T.A.L.K.E.R.: Shadow of Chernobyl. When mirrored, the handwritten line says "Никому не давай!!!". When translated, it reads: "Do not give to anyone!!!".

Inside Lab X-19, going down the stairwell leading to the lower floor will lead to a room with a numerical keypad next to a locked door. The combination for the door is 342089. The room inside contains several boxes of 5.56x45mm AP rounds, Medkits, and F1 grenades. The passcode can be found in the "Found PDA" entries in the diary of the player's PDA after the player leaves Lab X-19 with the Brain Scorcher turned off. The journal entry indicates that these were supplies intended for Monolith soldiers.

The giant antenna structure for the Brain Scorcher was inspired by the Russian Woodpecker, a former Soviet military over-the-horizon radar system designated Duga-1 (NATO reporting name 'Steel Yard'). The facility was part of the Soviet ABM early-warning network and consisted of a gigantic radar array as well as a large nuclear bunker reaching several levels below ground.

In addition to the rumor, caused by the secrecy around the facility, that the facility was the real cause of the Chernobyl disaster, the BBC documentary The Mysterious Mr. Tesla speculated that the Duga-1 installation could in fact be a Soviet mind-control transmitter, imposing on people's ability to think rationally and stay calm.