The Build 1844 is a public build of S.T.A.L.K.E.R.: Shadow of Chernobyl. The build was presented for first time during February 2004.

The build is a press release marked February 2004 and contains levels showcasing the features of S.T.A.L.K.E.R.: Shadow of Chernobyl: physics, ragdoll mechanics, weapon mechanics, graphics and gameplay. The most interesting element is present_military, the aforementioned gameplay presentation. It allows the player to complete a simple mission (retrieve an artifact for the trader), engage in combat with mutants and humans as well as experience anomalies, all in the setting of an early version of the army warehouses.

The gameplay is fairly simple - there are no iron sights, mutants and mercenaries will home in on the player instantly and weapons are conveniently scattered all around the place.

Burnt Fuzz and Electros can be encountered. Around the edges of the level area are located special types of 'anomalies', which purpose is probably to prevent the player leaving the area by throwing him back to the area.

The gameplay is tied up with a simple storyline, which involves the player to help a critically wounded stalker to retrieve a stolen artifact called 'Mercury Ball' from an enemy Mercenary (referred as 'Dog') and bring it to the trader located in the middle of the area in an underground bunker to the southeast from the Bloodsucker village.

The build features two ambient tracks playing during the gameplay:

According to the file description, both of these tracks were composed by an artist known as MooZe, who later composed several songs for S.T.A.L.K.E.R.: Shadow of Chernobyl Soundtrack.

Trading with the dealer.

PDA Map.
Add an image to this gallery 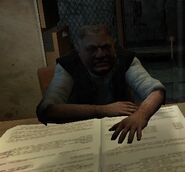 The wounded stalker.
Add an image to this gallery

Mercury Ball.
Add an image to this gallery

Bloodsucker.
Add an image to this gallery

Retrieved from "https://stalker.fandom.com/wiki/Build_1844?oldid=59239"
Community content is available under CC-BY-SA unless otherwise noted.