A variation of the revolving grenade launcher. The given model is made especially for use of grenades of the western model.

The weapon is a variant of the Bulldog 6 grenade launcher modified to fire M203 Grenades. As well, it is the most durable weapon of the game, taking exactly 100000 shots to fully degrade.

This weapon was cut from Shadow of Chernobyl, and is only available through modding. All the files and references for it are in place, indicating that it was meant to be included, but never was. 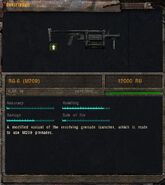 The RG-6 m209 in-game description.
Add an image to this gallery
Retrieved from "https://stalker.fandom.com/wiki/Bulldog_6_m209?oldid=72098"
Community content is available under CC-BY-SA unless otherwise noted.