The result of Secret Service genetic experiments on criminals, under the program of human telekinesis development. A humanoid creature of hypertrophied complexion, clad in shreds of shabby overalls. Afraid of bright light, the Burer dwells in dark and gloomy undergrounds and caves. Feeds on dead bodies.

A Burer is a type of mutant encountered only in S.T.A.L.K.E.R.: Call of Pripyat.

Burers are stocky, almost dwarf-like monsters that tend to stick to underground sections, avoiding light at all costs. They can be mistaken for bandits at first, due to their propensity for wearing long black trenchcoats, but are a far greater threat, able to paralyze and break an opponent's armor and weapon at will (although they never do so in-game). The Burers are not easy opponents even for experienced stalkers, made even more difficult due to their preference to travel in pairs or groups.

Burers also have a peculiar ability to mimic the cry of a child to lure curious prey, although this is only used by one on the toilet of lab X-8's cafeteria.

Aside from fan-made modifications, Burers are only present in Call of Pripyat.

Burers can only be enabled via the use of modifications, although they appear in Build 1935. They possess a powerful melee attack, as well as a 'shotgun' like telekinesis attack which damages everything in a cone-area in front of him - doing enough damage to kill a player if one is unfortunate enough to take it point blank. Burers however do not have much health compared to their later versions, and half a magazine to the skull with even a starting assault rifle should be enough to disable them.

Flashlights are theorized to repel them, and it does cause them to often turn their back to the players, which, while obscuring their face, allows a player a bit more time between attacks.

Burers are one of the types of mutants which may randomly carry a mutant-related item when killed. For Burers this item is the Burer Hand.

According to a cut dialogue, Burers were supposed to be very common in Lab X-18.[1]

Much like Shadow of Chernobyl, they can only be enabled via the use of modifications. There is no noticeable difference, only that they are slightly more resilient and, oddly, weaker attacking.

The first encounter with the Burer will likely occur as part of the Hunting: Unidentified Mutants quest given by Trapper. One also spawns in the Volkhov AA Complex in Yanov, guarding the armory after the player acquires Sokolov's Note. One is located in the Old Service Centre in Pripyat, guarding one of the Calibration Kits. Four are located in the Lab X-8; one in a toilet that will mimic the cry of a child until the player opens the door, and three are gathered in another room containing two documents. After obtaining the Mutant Hunter achievement, Burers will spawn randomly in Yanov, most likely near the Volkhov AA Complex or the Bitumen Anomaly.

Burers are extremely hard to deal with. While the PDA places them as the third most dangerous mutant in the Zone (behind the Pseudogiant and Chimera), they have a variety of special attacks, as well as very high health, making them more demanding opponents.

Dealing with Burers can be very difficult, especially because the player will mostly encounter them in dark, closed or semi-open spaces. Because of the telekinetic shield, it is advised the to deal as much damage as possible per attack. Do not attack when the telekinetic shield is up, since the Burer is invincible during this period. This leaves the player with shotguns, sniper rifles, or 40mm grenades. A single VOG-25 or M209 grenade will take out most of the Burer's health or, in rare case, kill it outright. The RG-6, RPG-7, and even the Gauss Rifle are obviously even better options, but their availability is questionable. Rifle rounds are also decent at killing Burers, but it will take a lot of time because of their high health. Taking cover is essential as the player can lean around corners if there is nothing else, because there usually isn't. Leaning also doesn't cause weapon sway like simply strafing from behind a corner would. Using weapons within a Burer's attack range is rather risky, since a Burer can yank the weapon from the player and toss it away.

Being able to manipulate objects, throwing grenades is very ill-advised as it can roll/fly away from a burer, wasting and possibly even damaging the player.

A completely opposite tactic is to take out the Hunting knife, and charge in slashing. While the Burers cannot steal the player's knife, it makes up for it by having a melee attack on it own, so be sure to equip an armor before trying. Generally any "military" vest (Berill or better) should do. They generally take six to eight slashes to take down. A similar tactic can be applied with the Eliminator shotgun; using the player's light, aggressively charging, then taking quickshots at its head. It will turn its back to the light, as well as it will try to to move to its preferred combat range, keeping it from attacking or shielding. Apply buckshot.

If the player happened to encounter Burers on semi-open areas, although this works in closed spaces as well. It is recommended to use a pistol (Black Kite or another high damage dealing pistol, or any pistol for that matter) and Psy-block since the Pistols are light enough so that the burers yank attack doesn't work with a Pistol. The Burer will try to take the player's weapon and push them (Psy-Block blocking this), shoot it in the head a few times before it brings its shield up. Wait for it to go down while aiming on its head, as soon as it lets the shield down fire away. Repeat this two-three times (depending on Pistol damage etc) and the Burer will exist no more. One Psy-Block will give player time to deal with up to three Burers this way without taking too much damage.

The trio of Burers in X8's "secret floor" are a special case - because of a minor bug in scripting, they have extremely high health regeneration active, unless the player is in the room. As such, they can be only killed from outside of the room with very high-damage weapons, such as the Gauss Rifle or the RPG-7. If the player don't have these, they will need to enter the room and deal with them with a knife, rifle grenades, or a shotgun. Although, caution should taken as it is one of the more dangerous fights in Call of Pripyat. A good tactic is to drop into the pit just inside the door, and then make hit-and-run attacks by running up the stairs and shooting them, then taking cover at the bottom again.

Wild - that is randomly spawned - Burers are not much of a problem in Yanov, as they can simply be taken down from long range or avoided completely. They do not pose a threat at long range. 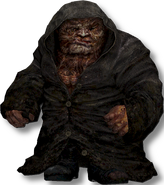 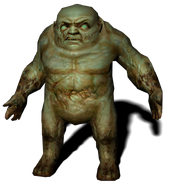 Early version of the Burer, or rather, the Dwarf. Dwarves were supposed to be generic type enemies, while the Burer was their so called "King" in the Dark Valley. 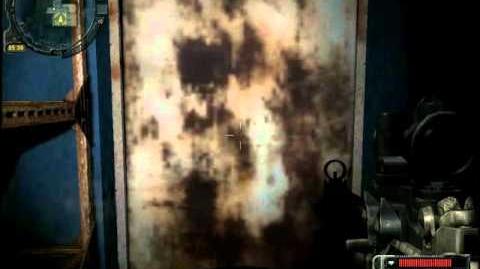 The crying baby in X8 - STALKER Call of Pripyat
The "crying" Burer.