Burner is a fairly common type of anomaly featured in S.T.A.L.K.E.R.: Shadow of Chernobyl, Clear Sky and Call of Pripyat.

The Burner can be a bit difficult to see, even in daylight, as it's only revealed by a faint heat haze. If the anomaly is triggered by either a living being or an object such as a metal bolt, it shoots out a tall pillar of flame in the air, burning everything in its vicinity. Though somewhat rare, the Burner anomaly is often found in clusters. Some clusters also emit extreme high ambient temperature, which hurts anything in their vicinity. Burners can emit temperatures as low as 100 degrees Celsius, up to several thousand, hot enough to crack concrete and melt metal, which explains why some Burners appear in areas that have massive cracks and severe damaged soil, while other sites are untouched.

Burners are very dangerous at high difficulties, and can be extremely dangerous even with top-tier armor. The Burners don't have a set spawn point like other anomalies do, or even a set trigger point. Simply being in the same vicinity can trigger a conflagration. A tactic for avoiding damage is to first throw a bolt into the anomaly, triggering it, then quickly running through the jet of flame. This tactic, if used repeatedly and without delay, can mean the difference between traversing a cluster unharmed and getting scorched at least once.

Call of Pripyat introduced a new type of this anomaly: the Boiler. It is, in fact, a Burner that has arisen underwater. They don't inflict as much damage but have a wider area of effect and deal more damage to your armor and helmet especially. A true testament to the Zone's potency and anomalous behaviour, it breaks the law of thermodynamics, heat convection, purely due to the fact that it uses fire as its source and lives in water.

The fact it is underwater may be an indication that it is the first 'amphibious' anomaly, as in the previous two games they could only be spotted above water or land, usually within or around the confines of buildings or tight areas. The Boiler seems to be a slightly more concentrated version of the Burner due to the type of damage it inflicts. The way it seems to be unaffected by surrounding water may mean it has "evolved" to survive in conditions where, under nomal circumstances, fire can't exist.

Clear Sky and Call of Pripyat[]

These anomalies can be commonly encountered inside the underground complexes, such as Lab X16 or Lab X-18. In the Wild Territory, several burner anomalies are located inside the tunnel near the entrance to Lake Yantar. Zombified stalkers tend to wander through the tunnel and die there. This is useful, as during the escort mission, they appear on the Yantar end, and many will walk straight into the Burner cluster. Some more can be found in the Wild Territory right after the building where Strelok originally finds the Merc Snipers.

They can also be found around Borov's hideout in the Dark Valley. Two are in the shed at the entrance to the gas station - if you enter through the front door, you'll walk right into it. Some are inside the bandit base in the trench below the derelict truck.

They can be found at the Burnt farmstead in the Great Swamp. Burners are also commonly found in the Fault anomalies in the Swamps and Dark Valley. The Concentration Camp in the Garbage also has Burners, but since the Bandits aren't too keen on letting you in, getting to them can be difficult. In Yantar, near where you have to get the PDA for Sakharov, and at the Symbiont in the Red Forest. They are also found within the Military Warehouses overlooking the road to the Garbage. And finally in Limansk in a corner behind an apartment house, located at the end of the road with the Space Bubbles.

A Burner anomaly cluster in a Basketball court in Call of Pripyat. 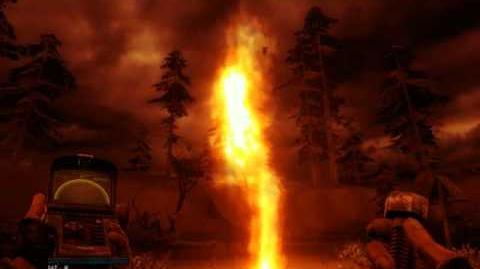 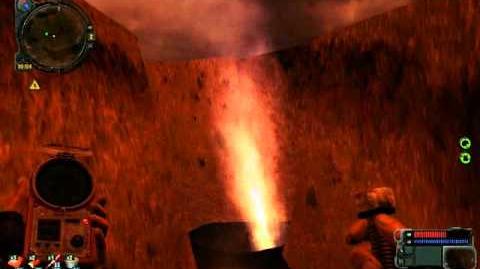