The CS-1 Body Armour is the standard armour for Clear Sky assault squads. This suit is only obtainable to the player in S.T.A.L.K.E.R.: Clear Sky.

The CS-1 consists of a tactical vest (with medium grade military kevlar) with carrying pouches and a steel helmet with a gas mask and large goggles, carried over a sky blue/white camouflage shirt and dark pants with metal kneepads and hiking boots. Heavier, kevlar-padded panels are added to the arms and legs to increase the protective performance. The chest rig appears to be a modified version of the Soviet made M32 chest rig that has been attatched to the body armour. All that is missing is the grenade pouches, which appear to be located on the legs of the wearer, or at least it would seem this way from viewing the in-game character models.

Despite the small appearance, this suit provides good protection from rifle bullets at medium to long range. Overall this suit is the best mid tier suit in the game, offering better anomaly and radiation protection than the Guardian of Freedom Suit, and yields the same bullet/splinter protection. When fully upgraded with armor upgrades, it offers equal rupture protect to a fully upgraded Skat-9 military armoured suit and only 10 less protection against bullets and anomaly damage, with one more artifact slot than the Skat-9.

This suit can be purchased from Docent Suslov, who is located at Clear Sky's base in the Swamps. The player can purchase the suit very early in the game for about 15,000 rubles after they achieve maximum reputation with Clear Sky while recruited; this is the time before the player leaves the Swamps for the Cordon. After leaving the Swamps, one will have to rebuild his reputation with Clear Sky until his reputation bar reaches 1/2 and then buy it from Suslov for a more expensive 22,500 rubles. The suit can only be upgraded by Gray and overall this is one of the best armours available with its balanced anomaly and firearm protection, price and weight.

The CS-3a that appears in the final version of Clear Sky is the second version of the armour. Clear Sky was supposed to have three different skins, one scout, one fighter and one heavy assault fighter.

The "heavy" model is completely different - it includes a full body Clear Sky pattern camouflaged jumpsuit, a large kevlar vest covering the torso and groin, armoured greaves and combat webbing that includes a lot of pouches and pockets on the front and back. The gasmask and helmet were recycled for use in the CS-2 body armour.

It must be noted that in the original Russian versions of the game, CS-1 is actually the low end armor and CS-3 is the high end armor. CS-3A and CS-3B were the development names for these armored suits. The description and name were confused during Clear Sky's translation. 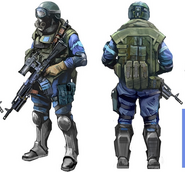 Concept art for the heavy variant 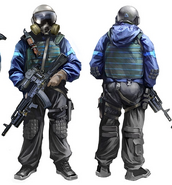 Concept art for the final version of the armour
Polski Русский
Community content is available under CC-BY-SA unless otherwise noted.
Advertisement