The CS-3a body armor is the standard suit for Clear Sky members in S.T.A.L.K.E.R.: Clear Sky.

This basic outfit consists of a jacket with a sky-blue/white camouflage pattern with a hood drawn over the head, a black cowl, a tactical vest, grey pants, kneepads and hiking boots.

It was designed for conducting search operations in areas of low anomalous activity. Its higher quality materials result in greater durability. Includes a container capable of holding one artifact.

It is used by Clear Sky scouts and command.

This suit can be received free of charge by capturing the Renegades base in the Swamps. It is the best suit the player can acquire for free in the Swamps, definitely superior to the Leather Jacket and Bandit Jacket. That being said, this suit still offers very low protection in all categories, and is unable to stop even pistol bullets. This suit is nearly as terrible as the PS5-M "Universal Protection", however this suit weighs less and comes with an artifact container.

The original design for the armour was quite different. Instead of the tactical vest, it had a sort of a tactical "apron", wrapped around the front of the user, a carrying bag and a shoulder-mounted AKM type 2 bayonet (likely Romanian). This model was present in E3's presentation and has been recovered from the game files for use in CS. 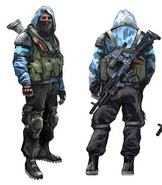 Concept art
Add an image to this gallery

Retrieved from "https://stalker.fandom.com/wiki/CS-3a_body_armor_(Clear_Sky)?oldid=71679"
Community content is available under CC-BY-SA unless otherwise noted.