The Mossberg Maverick or Mossberg 88 (named 'Chaser 13' in-game) is an American made pump-action shotgun and a simplified version of the Mossberg 500 shotgun. The variant used in all STALKER games is the Mossberg 88 6-Shot Security and uses a pistol grip with an all synthetic finish. The Chaser 13 is particularly invaluable as a CQB weapon due to it's compact design and universality. It uses 12x70 shot shells and 12x76 Slug and Dart rounds.

In Clear Sky, the Chaser 13 is widespread and commonly employed by experienced members of most factions , and can be upgraded by most technicians. It is also ironically found on several Zombified Stalkers in Yantar. It's barrel can be threaded to allow better accuracy with Slug and Dart rounds although this forgoes it's ability to fire Shot shells. It's a very reliable weapon and still, extremely effective at close range while can be effective on medium and against heavy armored targets using Slug and Dart rounds. The weapon can be upgraded to hold up to 8 shells.

One weapon of this type is located in stash in Swamps area. The information about coordinates of this stash can be obtained from stalker Cold and it costs 1500 RU. This is a very useful weapon at the first parts of the game.

Very rare. Professor Sakharov will sell them after you accompany Professor Kruglov in taking the measurements for the Psy-Helmet. Pavlik, Chef, Snitch, and Lukash's expert bodyguards are the only stalkers armed with Chaser 13 shotguns, making it exclusive to the Freedom Faction. The tube magazine holds up to 5 rounds. It weighs 3.0 kg unloaded.

One unique variant of this weapon called Combat Chaser exists.

This weapon can be acquired in the beginning of the game. Many Loners and Bandits carry it, and it can be purchased from Owl. It now has a 7 round capacity (9 after upgrade), and can be upgraded to semi-automatic. However a Franchi SPAS-12 can also be found in the beginning of the game, which is definitely a superior shotgun, sporting a semi-automatic firing mode by default and better stats.

However, it still has some advantages over the SPAS - weighing lighter, but still packing almost as much punch - along with its tighter grouping of shots, a more methodical shotgunner might be able to get more out of its 50 damage per shell than they would with the more rapid-fire SPAS.

Trapper, a mutant hunter can also give you his custom Chaser 13 named: Predator, after completing his list of mutant hunting related jobs.

Combat shotguns like the Chaser 13 and SPAS-12 can chamber different shot shells at a time, for example in one Chaser 13 one could load 4 shot shells, 2 Slug rounds and 2 Dart rounds. This is done by pressing the fire key during reloading and causing the player to stop reloading. Once satisfied with initial load, pressing the load different ammunition Key("Y" key by default) will have the player chamber new shells once he resumes realoding. This method allows one to adapt to different situations quickly as one can rapidly switch from unarmored hunting to armor puncher in a moment's notice. 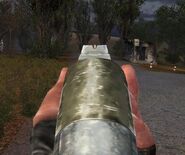 Aiming down the sights with Chaser 13 shotgun.

The Chaser 13 at the Zone Survival Guide

Retrieved from "https://stalker.fandom.com/wiki/Chaser_13?oldid=23563"
Community content is available under CC-BY-SA unless otherwise noted.