A Chimera is a mutant featured only in S.T.A.L.K.E.R.: Call of Pripyat. One of the strongest enemies in the game, Chimeras are hard to spot and even harder to escape from.

Chimera is a hairless cat/dog-like creature, close to the size of an adult lion, with two heads and a broad tail. Chimeras are extremely strong and they're able to turn a car over alone. They are the most deadly mutant encountered, jumping incredible distances and doing extreme damage. Though physically weaker than the Pseudogiant, the Chimera is considered deadlier due to its extremely fast speeds and aggressiveness.

Their attacks are fairly limited, to a leaping pounce, and a vicious - but very short-ranged - melee attack. The pounce itself isn't too dangerous compared to its melee, but it temporarily stuns the player, reducing them to a walking pace for a moment. The melee can make quick work of nearly any other mutant in the game - killing them with such force that it tosses the corpses into the air, which is an excellent warning sign that one is about. A player can take anywhere from 25-50% damage from a single slash, meaning heavy armor of some kind is nearly a necessity for surviving an encounter - and Exoskeleton users in particular need to be wary of the Chimera pouncing and combo-attacking them while they're reduced to a crawl. A Chimera also uses some Hit and Run attacks especially during night, trying to get behind the player's back and pounce on him and then run off to a distance, to repeat this attack again.

Chimeras were removed from Shadow of Chernobyl and Clear Sky, but appears as trophies on walls in places such as Yoga's trailer or the Freedom main building in the Army Warehouses. Trapper in Call of Pripyat explains why we cant see any chimera in first two games. He mentions that chimeras havent been seen in zone for years. that means they were extinct or there were only a few of them. The Chimera removed from the former do not attack players but moves in the same way as they do in Call of Pripyat.

Some fan-made modifications for Shadow of Chernobyl and Clear Sky restores the Chimera, but they functioned more like upgraded pseudodogs than the final incarnation seen in Call of Pripyat.

Remains of GSC notes from Shadow of Chernobyl indicate that the Chimera is the result of genetic experiments on animals within the Zone. As a result, it's faster, smarter, and stronger than the majority of other mutants in the Zone, be they created through Scientific methods or natural mutation. Most of its internal organs have duplicated, meaning it can take damage to some without being impeded significantly. It has few natural enemies, and the only creatures which posed a threat to it are the Pseudogiant and the Chernobyl Dog. 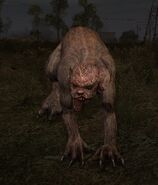 A closer look at the Chimera. 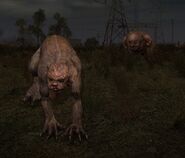 A Chimera and a Pseudogiant.

Chimera leaping at Major Deg in the "area around Jupiter". 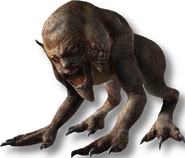