S.T.A.L.K.E.R. Wiki
Register
Don't have an account?
Sign In
Advertisement
in: Articles with unsourced statements, Shadow of Chernobyl Artifacts
English

Edit
watch 02:17
New Pokemon Games - The Loop
Do you like this video?
Play Sound

The Crystal Thorn is an uncommon artifact featured in S.T.A.L.K.E.R.: Shadow of Chernobyl.

Crystallizes in the anomaly Burnt Fuzz. Naturally takes out the radiation from the organism. That is, through the ears along with some amount of blood. Blood loss is possible also through over[sic] openings. Widespread and quite effective, which is the cause for the stable pricein [sic] the artifact market.

The Crystal Thorn reduces irradiation by 20% but increases bleeding as well by 100%.

The Crystal Thorn is primarily found in stashes. These stashes include:

Another is located in a packing case in the loading bay of the Bandit compound in the Dark Valley. 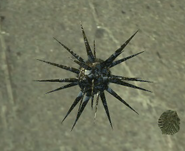 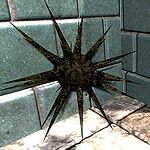