Always gloomy, always misty and always rainy. Stalkers venturing into the Dark Valley are likely to find valuable artifacts, instant death, or both. A place frequented by some of the most experienced old-timers, though you may also stumble upon some common bandits. There's supposed to be an underground lab around there somewhere, so it might be worth to look for a hidden entrance along the way. No one has returned from there alive though and no one can tell for sure just what nasty surprises await you there.

This dark, foreboding place, filled with rusting wrecks and crumbling buildings was once a major agricultural research area. In addition to a farmstead and a factory, the construction of a scientific Lab X-18 had begun in 1981. Soviet geodesists also worked in the area.

All of this was cut short by the 1986 disaster. The area was abandoned, the unfinished science center left to crumble and all of its buildings, stripped of useful amenities, left to rot. This allowed it to become an excellent location for research. The X-18 laboratory located underneath the factory flourished, delving into psychic research, the Noosphere and radiation-induced mutation. Even the fall of the Soviet Union did not stop its research. The Group continued their work, paving the way for the C-Consciousness project and its plans to forever rid the world of evil via influencing the Noosphere.

X-18 proved crucial in these efforts. However, in the wake of the second incident in 2006, the facility was abandoned following a disastrous security lapse which resulted in the mutants in the facility escaping and turning on their overlords. The lab was sealed and the Dark Valley once more abandoned. It earned itself a reputation of a dark, forbidding place among stalkers.

This did not discourage Freedom, whose members (under Chekhov) seized the valley for themselves and established their main base of operations. With the valley firmly under their control, they believed themselves safe. History proved them otherwise. A major mercenary detachment entered the valley, and using its extensive underground network, began a series of coordinated strikes against Freedom forces. The valley became the field of a very one sided battle until Scar helped Freedom identify and destroy the attackers.

But even the temporary peace that followed did not last. Bandits under Borov's command pressed Freedom in the valley, exploiting the fact that they overextended themselves and pushed them out of the valley. The rogues then established a base of their own in the valley. However, the cursed nature of the place would return to bite them; Strelok, in his pursuit of knowledge about himself and the Zone raided the base and killed Borov to obtain the key to Lab X-18. The Military flooded the area shortly thereafter, trying to seize documents Strelok was carrying out of the facility and prevent the knowledge from falling into the wrong hands.

The Dark Valley is hostile territory and the location of the entrance to the infamous Lab X-18, the most well-known feature of the Dark Valley, followed closely by the Bandit Base. Due to its placement here the Bandit presence in this area is obviously high. In the Lab X-18 one will find a few more rare mutants like Pyrogeists, Poltergeists and Pseudogiants. On top of that, once Lab X-18 has been visited one will also encounter the Military. Also, the mutant presence includes Blind Dogs, Pseudodogs, Fleshes, Boars and in later stages Bloodsuckers, Snorks and Rodents. One more unfriendly sub-location is the Abandoned pig farm, full of unfriendly Loners. There are patches of intense Radiation, lots of Anomalies and enemies are quite prevalent.

There is a place in the Dark Valley that has a strange coal chute or some similar device with a few strange items in the bucket area. A certain amount of climbing is required to reach the bucket, caution is advised as there is lots of radiation inside. Within the player will find a Guitar, some Bandages, a couple of Medkits and an unknown item labeled the hand_radio in the inventory. If one takes the guitar back to Sidorovich, he will pay a tiny 30 Rubles for it, but unfortunately no one else will buy the Hand Radio.

The Dark Valley is the home of the Freedom headquarters. There aren't many dangerous mutants here, the most common ones are the dogs, fleshes, boars, and in one mission, a Psy dog and two bloodsuckers. Hostile Mercenaries may be found in several key areas. After destroying those Mercenaries and the tunnel they use to get into the Dark Valley, the place becomes relatively safe, as long as the player is not enemies with Freedom. 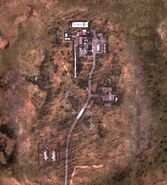