Wilderness
Darkscape (a portmanteau of the names Dark Valley and Escape) is a location cut entirely from S.T.A.L.K.E.R.: Shadow of Chernobyl. 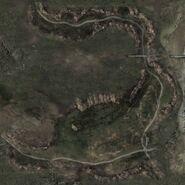