Edit
watch 02:59
Metroid Dread - The Loop
Do you like this video?
Play Sound

Bastards! I hate them! Sending us to fill every gap

The "deserted soldier" is a character featured in Shadow of Chernobyl.

The soldier was a member of a military recon unit sent to Agroprom Underground, after most of his team was killed, the soldier deserted and retreated to the swamps in Agroprom. He is the target of the mission, Kill the soldier.

The soldier was posted at Agroprom Research Institute, he had repaired an old car and got it working in half an hour. However, the local commander took the vehicle for himself, stating he gets it due to his rank and ditched the ride in front of the base to be forgotten.

The soldier was later sent to the catacombs under Agroprom in order to scout out the tunnels, however, most of his team was killed by mutants and he deserted in fear. The soldier decided to hide in the swamps and think of a plan to get out of The Zone since he believes he will be shot for deserting his company. Marked One is tasked with killing him by the barkeep, who most likely got the contract from the soldier's former employers.

Once the player gets to the swamps, the soldier can be heard moaning in anger, "Bastards! I hate them! Sending us to fill every gap!" Or, "I wanna go home!... Home!." The soldier is friendly when approached, being a member of the Loner faction. When the player speaks to him, he tells him his story after begging him not to shoot. 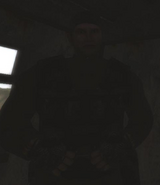 He is referred to as "ratcatcher" within the game files. There is an unused portion of dialogs in which he call himself "Ratcatcher" and says he breeds rats inside "the collector" to annoy the Military in the Agroprom Institute. He also claims that the rats are communicating with him. [1]