Diet sausage is a consumable item appearing in S.T.A.L.K.E.R.: Shadow of Chernobyl, Clear Sky and Call of Pripyat.

Diet sausage is a food item made of chicken and soybeans. It is commonly eaten in the Zone as a staple food, due to the lack of other food options available.

Commonly found on Stalkers no matter their allegiance and sold by nearly every trader in each installment of the game, "diet" sausages are the second most effective of the three food items in Shadow of Chernobyl and Clear Sky. In Call of Pripyat they're actually the worst food to carry around as they are as nutritious as other foods but heaviest of them all.

Made from a mix of chicken and soya, the "diet" sausage is often, for lack of other options, a stalker's breakfast, lunch and dinner in one.

In Shadow of Chernobyl they heal roughly an eighth of the player's health.

The diet sausage can be found in the following stashes:

They are slightly more efficient in Clear Sky than in Shadow of Chernobyl. 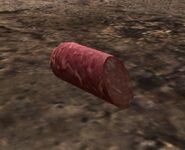 In Call of Pripyat, they recover a small 10-20 HP per sausage, and are more useful for their hunger-defeating properties.