An anomalous formation, roughly 10 meters in diameter, accumulating large quantities of static electricity. When triggered, the anomaly bursts into a storm of arcing electricity nearly always lethal to all living beings. Easily recognizable by the blue gas it emits, along with the endless arcing of small bolts of electricity in the vicinity, the Electro holds no distinction for what crosses its event horizon, be it a human, a mutants or an inanimate object, and discharges as soon as anything gets too close.

The Electro is always in clusters and often located in tightly confined spaces, although clusters out in the open with a spacing of one meter or more between neighboring Electros have also been recorded. They are easily avoided when outdoors, and at their most dangerous in confined areas. At nighttime, the Electro can be revealed using the Svarog detector or by throwing bolts into it, at which point it will discharge. In Call of Pripyat, any Electro that discharges will form a chain reaction and discharge any neighbors, leading to the activation of the entire cluster.

Its power and recharge rate could mean it is a natural generator, much like a thundercloud or lightning storm. Its power means a single Electro may be able to store a bare minimum of 5000 volts of tension, all the way up to several hundred thousand, with a current in the hundreds or even thousands of ampères, enabling it to kill almost anything in the Zone in just a few jolts. Lethality varies from game to game, with Call of Pripyat bearing the most dangerous variants.

In Shadow of Chernobyl, these anomalies are quite common and can be encountered in the following areas:

The Pellicle also can be found near Electros. It is, however, not the artifact's parent anomaly, which was cut from the game.

The Electro is also quite common in Clear Sky. Most notable locations that it can be encoutered are as follows: Great swamp, Dark Valley, Agroprom, Yantar, Red Forest, Army Warehouses and Chernobyl NPP.

Compared to Shadow of Chernobyl, in Clear Sky, the Electro spawns a slightly different set of artifacts:

Electro is a common anomaly in Call of Pripyat, and is widespread in all of the main areas of the game. It can be found in the following locations: Iron Forest Anomaly, Scar Anomaly, Parking Lot Anomaly, Jupiter Warehouse, North-western Tunnel, 'Jubilee' Service Centre, Old Service Centre and lastly Lab X-8.

It forms the same artifacts that it does in Clear Sky:

Several Electro anomalies appear in Build 1844 in the 'present_military' level. They are proximity-triggered.

When equipped with 4-5 Battery artifacts, a stalker will become immune to the anomaly, along with restoring health and "repairing" their armour each time they step into the anomaly. This can only be done in Shadow of Chernobyl. 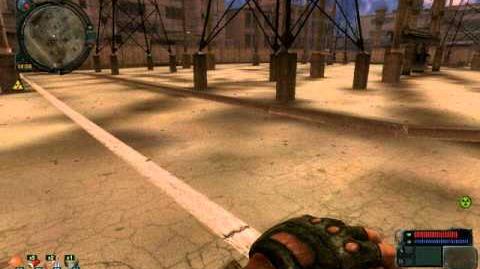