A smoothbore combat revolver-type shotgun intended to provide extreme firepower for militarized units. The weapon benefits from a large magazine and a high effective rate of fire, but its bulkiness and considerable weight, combined with a long reload time, are the price to be paid for these advantages. Rare in the Zone and is used primarily to clear closed spaces of mutants.

The Eliminator is a shotgun featured in S.T.A.L.K.E.R.: Call of Pripyat.

The Eliminator has by default a 12-round mag capacity. It has a fairly high fire rate and can fire slugs as well as buckshots. The Eliminator is the only shotgun that could be mounted with a SUSAT scope and any of its variants.

The Eliminator has by far the best overall stats out of any shotgun, losing only in handling to other shotguns (excluding the Predator, which has slightly more damage and is practically matched in accuracy) - and tied with the Hunting rifle for damage per shell. Surprisingly it weighs less than the SPSA-14, as it does in real life. Its most lacking area is accuracy - it has a fairly wide spread, roughly on par with a stock Hunting rifle. Using the sights, however, gives roughly a 20% boost to accuracy and slightly dampens recoil. Notably, even when fully upgraded for accuracy, the Eliminator's actual accuracy with buckshot and slugs alike is in fact lower than the SPSA-14 and Chaser 13, despite having a supposedly higher stat in-game. This is because accuracy is calculated from several variables like actual accuracy, recoil, etc. It is outclassed in accuracy by the Carabiner which, with upgrades, can get a similar fire rate, full-auto fire mode and same capacity.

Despite this, it's still a very good shotgun for the early to mid-game, although one may opt for the Predator in later parts of the game as it offers better damage per shot.

Nimble sells this shotgun for a hefty fee. Jack is the first NPC the player will see carrying one. Late-game, it can be found on high-tier NPCs such as expert Loners, Bandits, veteran Duty Stalkers, and Monolith fighters. Near the end of the game, it can be found in the hands of the Monolith Master. Hawaiian may sell this shotgun if the player sides with Duty in Yanov.

One can also be found hidden in an upside desk in the Jupiter Factory next to the documents Hermann sends the player to find. Another can be found in a stash in the Testing Workshop in Zaton. It is accessible from the catwalks at the top of the room.

The Eliminator can be upgraded by Nitro and Cardan, and repaired by any technician. It has a full array of upgrades available (three tiers), which can provide increased accuracy, rate of fire, reliability, or handling, as well as reducing recoil. It can be upgraded to fire fully automatic, just like the SPSA-14 and the Chaser 13. The Eliminator is one of the best weapons to use against mutants, so players might want to bring one with them into the Jupiter Underground and into Lab X-8.

The Eliminator can be fitted with a SUSAT Scope with the only advantage being providing better accuracy than the gun's unreliable iron sights. The best SUSAT variant for the Eliminator is arguably the short-range 1.6x SUSAT Scope, as any greater magnification would be practically negligible unless one tries to use the shotgun as a long-range weapon.

The Eliminator is modelled after the Armsel Protecta. It is one of the first weapons developed for S.T.A.L.K.E.R. A texture sheet that is different than the one used in Call of Pripyat appeared in Build 1098, but disappeared in subsequent builds. 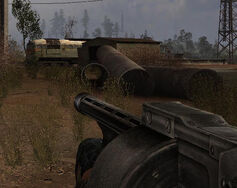