An emission (or blowout) is a sudden and powerful release of excess noosphere energy from the center of the Zone. They appear in all three S.T.A.L.K.E.R. games.

When C-Consciousness learned how to control the energy of the noosphere, with control came a price - the energy was so immense that they had to periodically release the excess, lest they be overwhelmed by it. Such a release became known to the inhabitants of the Zone as a blowout or emission. On June 10, 2006, the very first emission occurred. Unprepared military and scientific personnel were instantly obliterated. This also caused the Zone to expand by 5 kilometers.

During a blowout, noosphere energy floats from the center of the Zone to the outskirts in a circular pattern, affecting the minds and bodies of the living. The C-Consciousness can unleash the blowouts at will, usually as a deterrent or in retaliation against intruders, such as Clear Sky or Strelok[1].

Emissions were cut from Shadow of Chernobyl, though several user-made modifications reintroduced them. However two emissions were scripted to happen in the game. The first one was at Yantar when the Marked One was helping Kruglov take measurements; however this was a large psionic emission, rather than a typical blowout disaster. The second one occurs during the Chernobyl Nuclear Power Plant level during the Military assault on the plant, and the player is required to enter the Sarcophagus before it occurs.

In Clear Sky, emissions are a part of gameplay and occur relatively frequently when the player enters a location. An emission can be observed when a large thunder-like boom and rumble is heard, the ground slightly shakes and the player is immediately alerted via their PDA, which shows the approximate time to get to cover with flashing yellow icons on the map. When an emission occurs the player's secondary objective is replaced with finding the closest cover available, although the PDA is slightly unreliable in that it only identifies the shelter's location, not whether its safe or not. It is strongly advised one memorizes "safe" shelters in-case the PDA directs the player into unfriendly territory. When an emission is occurring all NPCs will refuse service or will simply disappear, so one cannot traverse the Zone using guides. Energy drink is useful in helping to get to distant shelters quickly.

Occasionally during an emission the player will be unable to use one of the safe places. If this does happen, the player should then go to the nearest alternative safe place shown by the flashing yellow icons. The player can also go to the ‘’next objective location’’ in the main game play, shown on the map by the next objective red icon, for safety. This is only possible if the red icon is present and not too far away, to get to in time.

Example: If an emission occurs when entering the north part of the Red Forest (near Forester) from the Military Warehouse district, the player would normally go to the trailer (yellow flashing icon) by the gate to the Red Forest for safety. It can happen that an NPC will be standing in the doorway of the trailer making it impossible to enter. The player can quickly go to Forester (red icon, which becomes a yellow flashing icon when near) and stand next to him, which is a safe place to avoid the emission. Therefore the player should also look on the map for the red next objective icon as well as the flashing yellow safe place icons when an emission occurs.

Provided that the player is not too heavily loaded with gear and barring unfortunate events, the player can reach any of the single shelters in a level from the emission starting point, but not all shelters can be visited in the level during a single emission. The player can also return back through the exit-entry to the previous level, if the shelter is nearer in the previous level and wait out the emission there.

Failing to get in shelter in time will result in the player getting heavy damage which eventually leads to death.

A scripted emission occurs after the player successfully disable Strelok's psi-protection, and leads to Strelok becoming an unwilling agent of the Common Consciousness while surviving members of the Clear Sky faction were brainwashed into becoming members of the Monolith faction. After the emission the fate of Scar is unknown.

Emissions return in Call of Pripyat. Much like their Clear Sky counterpart, they occur randomly during gameplay. When one happens, the weather changes to stormy, and will eventually change to full-red sky when it start to strikes. A radio announcer (Beard in Zaton, Bonesetter in Yanov, Kovalsky in Pripyat until Evacuation is completed, after which no one will warn the player through radio) will warn the player, and all NPCs will run towards the nearest cover. Unlike Clear Sky however, blowouts can now interact with NPCs in that those who fail to get in shelter in time will die at the end of the emission. Also, instead of being a secondary quest, it will replace whatever main quest is currently selected, and the PDA will point the player towards the closest shelter. It points toward any closest shelter, including enemy-controlled ones; in Pripyat, it can well point the player towards the River Port which is inhabited by hostile Monolithians, or the School which is regularly visited by hostile Mercenaries. A new feature is its ability to respawn artifacts in anomaly zones, at a rate of 15% per emission.

Likewise, failing to get in shelter in time will result in heavy damage, too much to be counteracted by Army medkits.

Only one scripted emission occurs during the storyline, during the Evacuation, before the player can communicate with the Military HQ again. The player is locked in shelter during the blowout.

An Emission in action[] 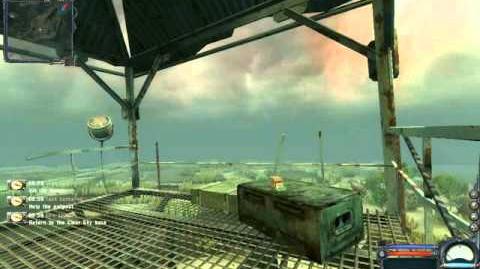