This is an excellent energy drink consisting of caffeine, taurine and a mixture of rejuvenating vitamins. Just the ticket when you're too tired to push forward!

The drink can be bought from all traders and is also commonly carried by experienced, veteran, and expert Stalkers. Drinking the item will give the player a 80% recovery on endurance.

The drink's properties were reduced in Clear Sky, giving now a 50% recovery. Nonetheless, this is an useful item for long runs. Energy drinks are sold by barmen and can be commonly found in the inventory of NPCs from various factions. 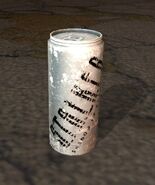 Often used by stalkers on long trips when no breaks can be afforded. The drink contains easily digestible carbohydrates, as well as drugs that stimulate the release of adrenaline into the bloodstream.

In Call of Pripyat, rather than instantly restoring stamina, drinking a can of energy drink will instead provide a large boost in the energy regeneration rate of the character for a whole minute. This, combined with Hercules will allow the player to sprint long distances without tiring out while carrying a heavy load. This drink is only sold by Beard and Hawaiian, and is a common find among stalkers from all factions. 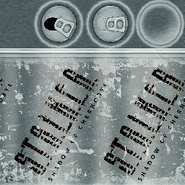