An experimental sample of a military exoskeleton. Was never mass-produced due to extraordinary cost and some design flaws. Despite this, it is in demand due to its ability to take on the weight of all carried equipment, and therefore small batches are made in underground facilities outside Ukraine. Comes with a built-in artifact container.

This armour is the product of advanced military research, initially meant for use by the Ukrainian Military for hazardous missions into the Zone. Due to the sheer cost of a single unit, however, as well as the numerous technical problems and design flaws, the Exoskeleton never reached mass production, but limited numbers continue to be manufactured in underground factories and make their way into the Zone. They were however not designed for the Zone, nor the Zone's hazards, rendering it a less reliable type of protection against anomalies and radiation.

There it is, a combat exoskeleton as large as life. The best protection you can get in the Zone from bullets, claws or grenade fragments, with the exception of armored vehicles. But it also takes after armored vehicles in that it relieves your weight burden - within reason, of course. 48,000 and it's yours, warts and all... err... by that I mean batteries and servomotors.

The Exoskeleton boasts the best bulletproof protection of any armour in the Zone, as well as the most protection from explosives.

It is composed of two separate pieces of equipment: the Radiation suit which boasts heavy military kevlar around the entire body, along with composite plates on some of the outer regions of the armour (which can be upgraded with titanium plates). In addition, radsuits also come with specially made tactical helmets with integrated gas masks.[1]

The exoskeleton itself is a battery-powered external frame with synthetic muscle fibers and servomotors, that give the wearer both superior protection as well as greatly increased physical strength. The latter is expressed in that the player, if using an exoskeleton will receive greatly increased carry capacity (beyond 100 kg), and melee attacks will be substantially more powerful, often taking out enemies in a single blow.

Some exoskeleton models may also include an automatic drug injector module designed to automatically give a certain dosage of anti-shock drugs or improved life support systems to increase a wearer's endurance, among other accessories[2].

The Radiation suit can be worn by stalkers without the external frame. Such stalkers appear in Clear Sky and Call of Pripyat (Monolithians and Loners). This version of the radiation suit appears to have been lightened to allow it to be worn without the Exoskeleton frame, as it does not provide as much protection as the full Exoskeleton armor, although it still provides significantly superior protection compared to most other Stalker armors, being second only to the Military Stalker "Bulat" Skat-9 military armoured suit.

Most Exoskeletons available within the Zone are third generation suits, with most design defects eliminated and their armour reinforced by Stalkers. Most factions that employ Exoskeletons also modify their suits to fit their needs, as well as their looks, in order to keep with their faction's aesthetic. The Exosuit is only issued to the most elite troops of the factions able to afford it, such as the faction leader's bodyguards which are posted outside their offices.

Such factions as the Bandits, Renegades, and Clear Sky generally do not have any Exosuits (one exception is a Bandit in Limansk) as they most likely cannot afford to have them in circulation due to rarity and/or high cost.

As alluded to in the overview, the Exoskeleton suit allows a greater than normal maximum carry weight. The standard suit allows up to 80.0kg of weight to be carried. There is a trade-off, however - up to 70.0kg can be carried without a fatigue penalty, but between 70 and 80kg results in an increased rate of fatigue. This penalty is reduced somewhat as the main restriction of the Exoskeleton is the loss of the ability to sprint. A single Moonlight artifact is sufficient to counteract the rapid fatiguing in the 70-80kg weight range.

The price of 200,000RU makes it the most expensive item in the game. It's cheaper at the bar where it will be sold after Yantar and the Red Forest / Brain Scorcher mission.

Note that all factions (at least in version 1.0005 and 1.0006, and excluding bandits) can have exoskeleton experts. Mercs will use it after the player destroys their camp in the army warehouses. Also, NPC wearing this suit can sprint, despite the fact that the player cannot sprint while wearing this suit. This happens by throwing a grenade near/at an exoskeleton NPC, and so this is triggered.

The exoskeleton in Clear sky is probably in it's worst form compared to the other 2 games of the franchise. Although it greatly boosts you weight carry capacity, it prevents you from sprinting and degrades very quickly, while the protection it provides is barely better than other high tier armors such as the Berill-5M or PSZ-9 Duty armor.

Exoskeletons have a very wide array of upgrades available, most of them unique. These include the ability to have even more superior anomalous or bulletproof protection, the ability to carry more than 100 kilograms of equipment, ridiculously increased durability, and the ability for the suit to automatically heal its wearer, among other things. The drawback to this, however, is that each upgrade is extremely costly, and repairing the suit itself is also expensive. In addition, Exoskeleton does not sport a built-in NVG module and while it can be upgraded to have even 2nd generation NVG module, it will block one upgrade tree.

The Exoskeleton received an upgrade in CoP, with its base anomaly protection being second only to the SEVA suit, though its radiation protection is as low as ever. The radiation drawback is merely trivial, since the need for protection concerning high radiation levels have been diminished by the fact radiation is no longer dangerous as in previous games. A new feature is a tier 3 upgrade that allows the player to sprint while wearing the suit, which is available only from Cardan after giving him a calibration kit.

It is effective as a general purpose suit as it combines effective anomaly and hit protection. It is also the best suit to use to carry heavy equipment as, with upgrades, it allows the player to carry up to 90kg of equipment, 114kg with two Goldfish artifacts (easily done since the suit can be upgraded with 4 artifact slots, meaning one could combine two Goldfishes and two Bubble artifacts to suppress the radiation), and 134kg with the help of a Hercules drug.

However, it prevents the use of a helmet, which prevents the player from using the third-gen night vision available only from the Sphere M12 helmet, or extra protection provided by an helmet. Overall, it has lower anomaly protection than a Guardian of Freedom suit combined with an upgraded Screen helmet, and less hit protection than a PSZ-9d Duty armor or a Skat-9 military armoured suit with a Sphere M12.

It can be ordered from Nimble at any point in the game, however; it will cost 33% more than when bought from Owl as soon as the player has either the One of Ours or Boss achievement combined with the Wealthy Client achievement.

Like all suits with integrated helmets, it has five upgrade paths. The biggest problem with the Exoskeleton is that one cannot run while wearing it until the player performs the Servomotor upgrade. It is a Tier 3 upgrade, so it requires the Calibration Kit and can be only performed by Cardan, which means that the Exoskeleton cannot be effectively used through most of the game until the player has reached Pripyat.

Other than that, it has a whole array of both bulletproof and anomaly protection upgrades, maxing out its Armor at 85%, and with both the carry weight upgrade and weight reduction upgrade, the suit itself will weigh 15 kg while letting the player carry 90 kg of equipment (up to 114 kg if the player decides to use two Goldfish artifacts). However if one uses Hercules the limit can go up to 134 kilograms. All this combined with 2nd generation night vision, four artifact slots and +4 health recovery.

Here are some different variations of Exoskeletons. All of them were present in all of the games, unless it says differently in the captions:

A close-up of the standard exoskeleton gasmask

The Exoskeleton makes use of electrically motivated muscle fibre bundles and powerful servomotors to provide its wearer with superior strength, similar to the concept of Powered Exoskeletons (also called Powered Armours or Power Armour) featured prominently in science-fiction media, but actual prototypes exist and are being developed in reality.

The Exoskeleton featured in the S.T.A.L.K.E.R. series was actually a different version from the Exosuit that was initially created. The original Exoskeleton was just an external array of hydraulics and servomotors, attached to a light suit.

An interesting image resource exists in the Shadow of Chernobyl files: ui_icons_npc.dds, which contains old 125x125 images that were initially going to be used as character portraits, before they were scrapped in favour of higher resolution ones. They contain portraits for what can be described as a transitional exoskeleton – they feature the final tactical helmet, but make use of regular stalker suit textures (albeit with a few modifications) put on the final exoskeleton mesh.

Clear Sky and Call of Pripyat uses the same HUD icon for exoskeleton (as seen in Gallery section). However, in Shadow of Chernobyl, exoskeleton uses completely another HUD icon, which was later used for Freedom exoskeleton suit in Clear Sky. 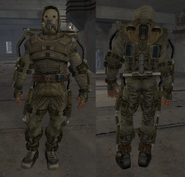 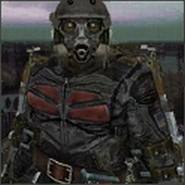 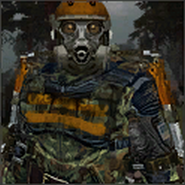 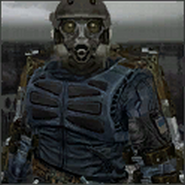 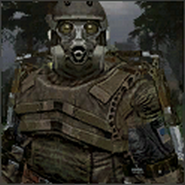 Close-up of an exoskelly's gas mask 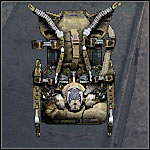 Artwork of an Exoskeleton worn by a member of The Tribe in S.T.A.L.K.E.R.: Southern Comfort.