The Eye decreases bleeding by 40%, but gives a +2 in radiation. The Eye makes the use of bandages less necessary, and any anti-rad artifact can counter its radiation.

The Eye returns in Call of Pripyat unchanged from its previous counterpart. It is also part of Beard's artifact orders.

Selling the Eye is highly economical compared to other uncommon artifacts that can be turned in for the same amount of money (18000 RU), as its utility is generally of lower value (as bandages are widespread and relatively light), and as such is better suited for financial gain.

The Eye may be found in any heat anomalies; the Ash Heap anomaly field in Yanov spawns one by default. 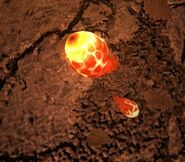 Eye Artifact in Call of Pripyat
Add an image to this gallery
Retrieved from "https://stalker.fandom.com/wiki/Eye?oldid=70056"
Community content is available under CC-BY-SA unless otherwise noted.