The Fireball is an artifact featured in all three S.T.A.L.K.E.R. games.

Crystallizes in the anomaly Burner. Fights well with radioactivity, though the heightened rate of energy exchange wears out the muscles of the moving apparatus. Won't be able to run for long. Artifact emits heat.

The Fireball is an uncommon artifact that can be found in the Agroprom Underground inside the hideout containing Strelok's stash. The Fireball is normally placed in the open on top of some equipment just to the left of the player as the room is first entered; due to a spawn bug, the Fireball could appear inside the equipment, making it impossible to obtain. The player may encounter them at Wild Territory and in most Burner anomalies, Lab X-18 and Lab X-16. It can be found in the following stashes: Agrosafe in Agroprom, inside Rotted stump at Garbage, in the Switchboard with a secret stash in the Bar area of Rostok and in a Secret stash in Wild Territory.

Even though Fireball is a thermal artifact, it can be handled without fear of being burned. This artifact is valued for its ability to maintain a temperature of 75 degrees within a small radius, virtually regardless of its surroundings. Emits radiation.

The Fireball returns in S.T.A.L.K.E.R.: Clear Sky as an uncommon artifact that provides a +3 in fire protection but +1 in radiation. The player could combine multiple Fireballs as well as an anti-radiation artifact to get good protection against thermal anomalies.

Even though Fireball is a thermal artifact, it can be handled without fear of being burned. This artifact is valued for its ability to maintain a temperature of 75 degrees Fahrenheit within a small radius, virtually regardless of its surroundings. Emits radiation.

The Fireball in S.T.A.L.K.E.R.: Call of Pripyat remains an uncommon artifact as with its Clear Sky rendition, but gives a +6 in fire protection and a +2 radiation. By combining two of these, the player could get a heavy +12 in fire protection, although this would require a Bubble or two Jellyfishes to counter the radiation effect.

The Fireball can be found in thermal/fire anomaly fields; the Circus anomaly in Zaton spawns one by default. 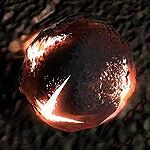