+2
The Flash is an uncommon artifact featured in all three S.T.A.L.K.E.R. games.

"Electro" sometimes births this artifact. Stalkers readily use it because of its good qualities. Not a bad price and a good external look make this artifact appealing to collectors.

The Flash gives a large boost in endurance, at the cost of 10% more damage per electric shock. Considering it is quite common, it is a good artifact to use to boost the player's endurance when carrying extra weight, although the player must be careful while crossing through electro anomalies.

A number of secret stashes contain this artifact:

It can also be found in the Wild Territory in the evening, lying near or in Electro anomalies, and can be semi-commonly found from Veterans Bandits in the area. One can find one in a tunnel in Yantar within a similar time period. It may also be carried by one of the associates of stalker called Vampire, a target of one of Barkeep's mission - Kill the stalker called Vampire.

Generally, the artifact may be spawned randomly near Electro type anomalies in each of the regions above. However, as with all artifacts produced by Electro anomalies, the Flash artifact will only be active between the in-game hours of 00:00 and 05:00. During this period, the artifact will be visible to and obtainable by the player. Flash artifacts which are dropped onto the ground outside the hours of 00:00 to 05:00 will deactivate shortly afterwards and will not become visible or obtainable again until the next iteration of the designated time period.

Thanks to its heavily crystallized molecules, this electrostatic artifact is a powerful absorbent of electric charges, able to protect its bearer from electric shocks of up to 5,000 volts. Emits radiation.

The Flash in S.T.A.L.K.E.R.: Clear Sky gives a +3 boost in electro protecton, while giving a low +1 in radiation. This means that one could easily combine more than one and counter their radiation effect with a single radiation-absorbing artefact, allowing the player to withstand more electrical shocks.

This electrostatic artifact is a powerful absorbent of electricity, which it later discharges. Flash is capable of protecting its bearer from electric shocks of up to 5,000 volts. Emits radiation.

The Flash can be found in electrical anomaly fiels; the Iron Forest in Zaton spawns one by default. 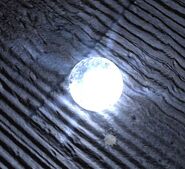