The Flesh is a horribly mutated pig appearing in all three S.T.A.L.K.E.R. games.

Like many other living creatures, domestic pigs in The Zone underwent serious mutations following the second Chernobyl disaster, affecting genes responsible for their metabolism. This eventually caused the animal's phenotype to change significantly.

A mutant pig of this type, known as a "Flesh" among stalkers, is one of the clearest examples of the Zone's perversion of nature. The pigs have developed a protective layer of scales and bones, their regeneration potential grew significantly and their nervous system became more complex. A side benefit of this mutation is their enlarged eye, which can see in a greater spectrum of light and has olfactory receptors within (in layman's terms, the flesh can smell with its eyes).[1]

They are familial creatures and usually travel the Zone in herds numbering five or six Fleshes. A herd is led by an Alpha Flesh, most often the most experienced and long lived one. The "Alpha Pig" can be easily identified by both its grayish skin and the scars covering most of its body.

Just like a normal pig, the Flesh is an omnivore and may attack a Stalker if desperate enough. Fleshes have been observed dragging corpses of small slain mutants such as Blind Dogs into a safe spot for consumption.

Even with their mutated and repulsive look, the Fleshes are still biologically pigs and therefore are safe for consumption (radiation poisoning notwithstanding). Some Stalkers take advantage of this fact by chopping their limbs and head off, skewering them onto a makeshift spit, and roasting the beast over a fire for food, similar to how roast pig is prepared.

Fleshes are the easiest mutant to face, their attack does little damage and though they travel and attack in groups, they're big and slow targets. Furthermore, when running towards an enemy they do so head first which makes headshots almost a given. Sometimes Fleshes can be dispatched with nothing but a knife by stalkers, saving ammunition. Just like Blind Dogs, Fleshes will panic and run away when some members of the herd die unless when led by a Boar or the "Alpha Pig".

In all three chapters of the S.T.A.L.K.E.R. franchise, Fleshes are a common sight, appearing in substantial numbers almost everywhere except underground and some Monolith-controlled areas.

In Shadow of Chernobyl, Fleshes can be found in the following locations: Cordon, near the abandoned pig farm; Garbage, a lair is located southwest from the Duty checkpoint; Dark Valley, in the swamp; Army Warehouses, near The Barrier.

In Clear Sky, Fleshes appear in the same areas they have during Shadow of Chernobyl, along with the Great Swamps. They are absent in Monolith-controlled areas, however.

In Call of Pripyat, Fleshes are everywhere, except in the ruins of Pripyat itself. Unlike in previous games, Fleshes are no longer docile and now more aggressive, regardless if they are in packs, and will attack a stalker if they are close enough. Although, they still do have low morale and is still likely flee from a fight when their Alpha and/or the majority of their herd is killed, or if it has sustained heavy damage if it is alone. 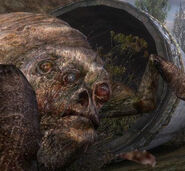 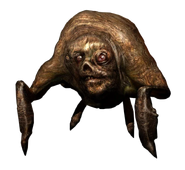