A police pistol of Ukrainian production, replaced the PMm. In comparison with the other pistols, it has improved accuracy, ergonomics and a larger magazine, but is less reliable.

The weapon appears as the Fort-12Mk2. The Fort-12Mk2 is slightly less reliable and has lower handling than the PMm, but is considered significantly better in the areas of ammunition capacity and accuracy. It can be equipped with a silencer.

It is sold by Sidorovich at a low and affordable price after the player gets the flash drive from Nimble. Wolf will award a free Fort-12Mk2 along with some spare ammo and grenades if the player single-handedly clears the vehicle yard of Bandits.

The weapon returns in Clear Sky as the Fora-12. It still performs better than the PMm but has lower handling. The Fora-12 is primarily used by experienced Loners, Bandits, some Duty members, and of course, the Military. One can also find a few experienced Loners who have this pistol with a few modifications. This weapon can be upgraded at Yar's hangar to accept 9 x 19 ammo. With the capacity upgrade as well it makes for economical stopping power throughout the levels.

It can be bought from a variety of traders and uses the same upgrades used by most 9x18 caliber weapons. A free slightly upgraded Fort-12 is available to the player after accepting the job to kill the Military rescue squad attempting to rescue Major Khaletskiy.

The pistol shares the same upgrades as all pistols.

A Ukranian-made pistol predominantly used by law enforcement organizations. Provides higher accuracy, better ergonomics and has a larger magazine than the PMm. These pistols make it into the Zone in large numbers thanks to the sale of defective weapons, which suffer from technical miscalculations in early design models. Despite this, the pistol is in demand among stalkers thanks to its good combat characteristics.

This pistol has become somewhat rare, since stalkers at the center of the Zone need better weaponry. It is sometimes possessed by rookie Loners and Bandits, as well as some Zombified Stalkers. The fastest way to find this pistol is to either take the steel box from the Unreachable Zaporozhetz and ask Cardan to open it or investigate Stingray 2 crash site and loot the pistol from one of the deceased soldiers around the wreck.

It may not look good, but actually is one of the better (if not the best) post-USSR pistols available to player, since it has a spacious magazine (16 rounds after upgrade), is accurate, reliable enough (it doesn't jam as frequently as in Clear Sky) and has the ability to change caliber to the more powerful 9x19 mm. When loaded with 9x19mm PB1 rounds, it can quite easy kill weaker mutants (such as blind dogs or fleshes) or unaware zombies, making it an useful weapon for minor threats. 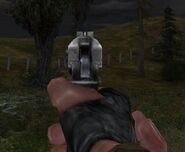 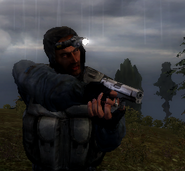 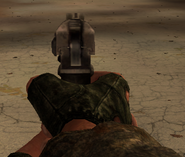