A new addition to the Western-made assault rifle family, which differs significantly from previous models in the series built on an automatic foundation with a semi-open bolt assembly, this weapon is more like American automatic gas-operated assault rifles with a short-stroke gas piston system. These changes ensure that the rifle is a first-rate example of a modern weapon - lightweight, reliable and ergonomic.

The GP37 sports an internal scope, making it very viable as a marksman weapon. Accuracy is good, recoil is relatively low and the damage per shot makes it multipurpose on all ranges. Significant downsides, however, include that its reload time is quite long compared to other weapons of its class, and that it cannot mount a grenade launcher nor a suppressor. Also, due to its high rate of fire (actually highest of all other assault rifles and automatic weapons in general) it is the most unreliable weapon in game (even worse than Viper 5 in that respect, which is also one of the least reliable weapons in game) and its condition bar depletes visibly faster than that of most others. However, it still relatively rarely jams (at least until its bar reaches around half or lower condition), in contrast to AKM-74/2U as an example, which already starts to frequently jam once its condition bar is only slightly depleted. Its accuracy, however, suffers greatly due to present unreliability, so the GP37, although being one of the most efficient weapons in game, is not suitable for longer use and should soon be replaced with a new one, if possible. The best way to save condition and accuracy with it as long as possible is to make headshots, since this generally requires only a round or few and is relatively easy to achieve due to high accuracy of the weapon and its integrated optical scope.

Its closest competitors are the Sniper SGi 5k and the FT-200M. The Sniper SGI-5k sports a better reload time and scope magnification as well as the ability to mount an M203 grenade launcher, while having slightly lower overall stats. The FT-200M is better in almost all stats, and also features an integrated grenade launcher - the only issue is that it can be acquired only in the Sarcophagus level.

The GP-37 is commonly used by Freedom and Monolith experts based in the Army Warehouses, Red Forest, Pripyat and on the outskirts of the Chernobyl NPP.

The GP-37 is still a top tier weapon and it can be upgraded to have very high rate of fire, or lower recoil than similar assault rifles. If modified for sniping, the GP-37 is one of the best assault rifles converted for sniper use due to its already superior accuracy and its custom scope. The player can add an M203 grenade launcher to it if one modifies it for assault purposes. It can be also mounted with a silencer by default. Unlike most of the NATO rifles, it cannot be modified to fire the 5.45x39mm rounds. If the player is inclined to use the sniper upgrade tree for the GP-37, such a weapon compares exceptionally well to other assault rifles upgraded this way. It trumps others in accuracy (by 2 "notches") and is as accurate as a unmodified SVDm-2. It matches the AC96/2 for damage, while being surpassed in this family only by the SGI-5K (by one "notch"). Its handling matches both the TRs 301 and AKM-74/2, while the fire rate, and fire modes, match a TRs 301 (if the TRs is fully upgraded for sniping). At the same time it's only 0.1kg heavier than a scoped AKM-74/2. Essentially all the rifle parameters (except damage) are the best in the assault-sniper family.

Despite the weapon being very rare and unique, it is outclassed in almost all stats by the FT-200M, which is given by the Clear Sky faction after lowering the bridge to Limansk. Unless the player manages to acquire the GP37 before Limansk, it is generally useless due to the fact the FT-200M sports better overall stats, has almost the same upgrades tree and has a grenade launcher by default.

The gun can be upgraded to three tiers, but only the Clear Sky technician Grey can fully upgrade this weapon. Limpid and Yar are the only other technicians that can upgrade the GP37, but they cannot fully upgrade it, although Yar can install the final accuracy upgrade for it. It should be noted that any upgrades made after acquiring the 4x scope will revert its value to 1.6x.

In Call of Pripyat, it is one of the best sniper analogues in the game once upgraded, having sniper-grade accuracy, high durability, the lowest recoil for a rifle in the game (barring the Gauss rifle) and being relatively cheap with common ammunition. By default it comes with a x1.6 scope. It arguably becomes the best assault rifle for sniping purposes in the game once Tier 3 upgrades are available to the player, as it can be upgraded to have 100% accuracy with no rate of fire loss - a feat only matched by the Vintar BC and the SVDm-2. Its performance as an assault weapon is also satisfactory, the low recoil coupled with superb handling and damage will make short work of enemies at close range. Its reliability is also very high, being nearly as reliable as the AKM-74/2.

The GP-37 is easily one of the best 5.56mm assault rifles, rivaled only by the FT-200M and Strelok's SGI 5k. The FT-200M sports an integrated grenade launcher (that the GP37 cannot even mount), has fire rate upgrades and its scope can be upgraded with target identification, while having lower stock fire rate and more recoil. Strelok's SGI has more damage per shot, can mount a scope, grenade launcher and suppressor, has more upgrades but has lower accuracy and handling, as well as more recoil.

The built-in scope can be modified for either close-range combat, high-contrast sight, NVG, or adjustable magnification. Due to an oversight in the upgrade text files, the scope upgrade description mentions that the upgrade restricts the weapon's scope to x1.6 but in reality, this actually increases scope zoom to x4.0 rather than restrict.

Acquiring weapon at the beginning of game[]

It is possible to get a GP 37 early without having to pay Nimble 20000 RU. First go to Yanov (right after start or after getting maps from Stingray 2 and saving 2000 RU). Then, in Yanov, take the mission to free Mitay from some bandits. When talking to Grizzly, choose the second option (hiring some stalkers to free Mitay at night with the player). Then, get to the meeting place. One of stalkers will be equipped with a GP37. Just wait until he dies (he is wearing a SEVA suit, which has poor bullet resistance) and take his weapon. However, the weapon tends to be worn out more the longer he stays alive. Due to damage, repairing it may cost some RU, but it's still cheaper than ordering one from Nimble. However, doing this means the player loses a chance for getting a Goldfish or Bubble from this mission, some of the rarest and most useful artifacts in the game. 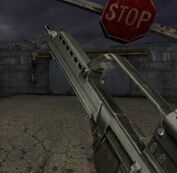 Aiming through the optical sight.

A G36 with a M203 Grenade Launcher attached.

The G36's inventory icon in Call of Pripyat. Note that only 4 ventholes are present on the handguard.

A loner holding a GP37