A super-accurate hi-tech weapon known as item 62, this rifle was developed in secret laboratories located inside the Zone. The weapon operates by accelerating bullets to extremely high speeds using a system of electromagnets, which provides incredible stopping power with virtually no recoil. The weapon is powered by using capsulated artifact fragments in the batteries.

The first designs for the rifle came from a covert weapons research program in the Chernobyl Zone of Exclusion, before the Zone even came into being. The project that eventually birthed the Gauss rifle focused on creating weapons based on the principle of projectile acceleration via an electromagnetic field. Cardan, one future stalker, was one of contractors involved in its development, as a designer. The entire project was scrapped in 2004, as a compact-enough power source could not be found. The testing workshop in Zaton was sealed, with the test Gauss cannon and all documentation.[2]

After the Zone came into being in 2006, the Clear Sky faction took prototype versions of the weapon (with no great problem, as they were part of the Group) and remade one of them to function as the non-lethal EM1 Rifle, using pieces of the Flash artifact to power it, solving issues with power supply once and for all.

After the faction's downfall at their failed assault at the Chernobyl Nuclear Power Plant, the Monolith obtained the EM1 Rifle and used it as a basis to produce their own version of the Gauss rifle in limited quantities. The Monolith adapted solutions introduced by Clear Sky. The result of their efforts was an incredibly powerful sniper weapon that virtually outclassed every available firearm in the zone in terms of raw power and accuracy.

Unlike traditional firearms, the Gauss Rifle does not launch projectiles using combustion, but rather uses a series of electromagnets powered by fragments of a Flash artifact to fire special, ferromagnetic slugs at high speeds, capable of completely ignoring protective armor, even the armor of the Exoskeleton cannot stop a Gauss round at any range.

This setup makes it the epitome of sniping weapons, and excels in that role. With pinpoint accuracy, zero recoil, and almost invisible muzzle flash, the Gauss is perfect for sniping from any distance. However, the extreme damage of the shot is off-set by an extremely low rate of fire – it can only fire once every two seconds, and reloading adds another four seconds to the delay, the longest of any sniper rifle.

Apart from a custom barrel and internal mechanism, it uses traditional parts from firearms such as a folding skeletal stock (identical to the one of the G36), the grip is a recolored SG-550 pistol grip, the receiver is styled in the way of a traditional assault rifle and a modified SUSAT scope as a sight mount, and the scope has been modified for increased magnification.

The Gauss Gun is in its prime in the original game, used regularly by Monolith snipers late in the game. Despite its common use in Pripyat and Chernobyl, it's quite difficult for the player to get their own Gauss Gun before the Sarcophagus level, as all snipers using it are located on inaccessible rooftops and will not always drop the gun upon death. Furthermore, acquiring an undamaged weapon is even harder as the weapon is likely to take damage if falling.

Nonetheless, it is still a very powerful weapon and is able to kill a Pseudogiant in one shot. Ammunition for it is rather common and can be looted from the Monolithian snipers in the Sarcophagus, which is very helpful if the player refuses to join the C-Consciousness and takes part in the massive firefight outside the CNPP. The damage per shot make it an ideal weapon for long-range fights, although it has a mediocre fire rate. It is worth noting that it has a quite mediocre accuracy, and it has difficulty to hit targets at long range. It is also worth noting the Gauss gun is strangely underpowered and can not always score a one-shot kill on weak mutants such as dogs.

NPCs using the Gauss Gun aren't too difficult – the Gauss deals enough to likely induce critical bleeding, but the medkit can heal faster, and so long as the player's suit has a higher than 50% bulletproof statistic, only a headshot will result in guaranteed death for the player. By the time the player reaches Pripyat, where they first encounter the Gauss Gun, they will likely have a suit with 40-60%. However, the Gauss Gun does noticeable damage to armor and suits cannot be repaired unless the player has at least four Pellicle, Battery, or Spring artifacts.

A stalker named Vampire in the Dark Valley stalker camp will claim that he has a Gauss gun and sell it for 800 rubles. It is fake and upon payment he will retreat into the barn, if the player attempts to follow him in those inside will become hostile.

In Call of Pripyat, only one copy of the Gauss Rifle is found, used by the first Monolith Preacher who is encountered in Pripyat. Despite the belief that the Gauss rifle is an instant kill to the player, a fully repaired exoskeleton with armor upgrade (30%) could block one shot. However, it is still guaranteed death if the bullet is stuck on the head, and thus making the Gauss rifle an unparalleled threat, one that must be taken down immediately in order to survive.

Suspected of being the reason of the failure of Operation Fairway, a main quest leads to the player discovering the creation of the Gauss Gun. After recovering the documentation, the player can give the weapon to Cardan, who will repair it and give it back to the player. The ammunition returns from Shadow of Chernobyl in limited numbers, and can only be found in stashes and from Strelok if the player returns all documents to him. The second type is made by Cardan, who sells it 2000RU for a pack of six shots, making the ammunition by far the most expensive in the game.

The weapon's strong suit is its damage per shot; it was further increased compared to the Shadow of Chernobyl version, being able to do a full 200 damage per shot, the highest damage per shot of any non-explosive weapon of the game. This means that the weapon is able to kill any NPC within a single shot, including Exoskeleton-clad NPCs. Its stopping power is also powerful against mutants, as the weapon is able to kill any mutant up to Chimeras within a single shot, and it can even kill a controller, a burer or a chimera with a single headshot. However, it will take more than one shot to take down a Pseudogiant. This makes the Gauss gun an ideal sniper rifle, due to its high damage.

However, the weapon suffers from a mediocre fire rate. There is a very noticeable delay between two shots, and the maximum fire rate cannot exceed 30 RPM. This is a heavy downside as it prevents the player from effectively taking down multiple targets in succession. Additionally, its built-in scope makes close quarters combat nearly impossible as the scope as an increased magnification compared to removable scopes. This means that in order to use the weapon at close range, the player must rely on hip-firing, and due to the low hip-fire accuracy, it is generally better to avoid using the Gauss gun at close range. Last but not least, it uses very uncommon ammunition (the regular batteries are found in limited amounts in stashes, and the second type is very expensive - 2000RU for six shots - and heavy).

In conclusion, while a very good sniper, it should be used only a long range, as its mediocre fire rate make it very unpractical at close range, and for taking down multiple enemies.

Its rivals in terms of mutant hunting are the RPG-7u and the Bulldog 6 which are very effective against powerful mutants. The only drawbacks are for the RPG-7u that it holds only one rocket, and can damage the player if firing too close, and the Bulldog 6 is only possible to buy from Owl. Its close competitor in terms of sniping is the Lynx, an unique variant of the SVDm-2 which offers half of the Gauss gun's damage, very good accuracy, uses a more common ammunition and has a much healthier fire rate. While less effective against mutants, and not a guaranteed one-hit kill against NPCs (unless going for headshots), it is a highly effective weapon due to a much healthier fire rate and more common ammunition. Its sole drawback, aside from lower damage, is the recoil per shot, which is easily counterable through upgrades.

In version 1.6.02 ("Radioactive Edition" double DVD version) the following bug has been encountered: The locked door to the workshop under the Iron Forest anomaly is for some reason open before the quest to find it is initiated. After picking up the documents, not having the gun, returning to Cardan, and giving him the documents resulted in the Gauss Rifle spawning. This happened before the trip to Pripyat, and Lab X-8. This bug will give the player the weapon at an early stage, but for gameplay reasons it might be better not to use this exploit. What actually happens when the player meets the Monolith Preacher is uncertain. It is also worth noting that the pseudogiant did not spawn in this scenario. The problem seems not to be unique, as several encounters are described in, among others, this thread on the official Steam forums. Some of the posts indicate that this exploit could prevent further main quests from spawning, and so it is strongly advised one does not initiate this glitch.

In real life, the Gauss gun is actually more correctly referred to as a coilgun but both names are often used interchangeably. The name "Gauss" is a reference to Carl Friedrich Gauss, who formulated mathematical descriptions of the magnetic effect used by magnetic accelerators. Today the alias "Gauss rifle" has become widely popular in both real life and in fiction. Weaponizing such technology remains only theoretical as current coilgun technology has an extremely poor level of efficiency to the extent that inherently inefficient railguns are actually more efficient and practical to create and a number of such prototype weapons have existed for some time.

The Gauss rifle being completely recoiless as depicted in-game is actually incorrect in real life. The tremendous electromagnetic force imparted to the 2mm slug would still push against the source of energy, which is the Gauss rifle. The fact that the Gauss rife can cleanly cut through even heavy armor at long distances means that it would need to generate a significant amount of force, which would in-turn generate a great amount of recoil perhaps even at-par with that of a sniper rifle. 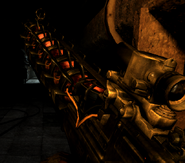 The Gauss gun's world model as seen in all games.