Edit
watch 02:05
Wiki Targeted (Games)
Do you like this video?
Play Sound

+3
The Goldfish is a rare artifact featured in all three S.T.A.L.K.E.R. games.

An artifact formed in the Vortex anomaly. Is activated by the heat of the body. Decide what's worse: radiation or knife wounds, and chose the lesser of the two evils. In any case you can sell the artifact for good profit.

The Goldfish increases rupture protection and radiation by 5%, making it not particularly effective, and best sold than used.

The result of a superinteraction of gravitational fields, Goldfish produces its own strong directed gravitational field and significantly increases stalkers' load carrying abilities, which explains why it's always in great demand. Emits radiation.

The Goldfish in S.T.A.L.K.E.R.: Clear Sky increases weight capacity by a very large +30kg, allowing the player to carry a lot more gear, while being only a radiation +3 artifact.

The result of an interaction between a large number of gravitational fields, Goldfish produces its own powerful internally directed gravitational field, which renders items within its range almost weightless. This artifact is most effective for reducing carried weight, which explains why it is always in great demand. Emits Radiation.

The Goldfish returns in S.T.A.L.K.E.R.: Call of Pripyat, although its weight effect was largely reduced to +12kg, which still makes the Goldfish a very effective artifact. Strangely, the Goldfish is, like the Gravi, a radiation +3 artifact, making the Wrenched sufficient to counter the radiation effect.

The Goldfish may be found in gravitational anomalies; the Pripyat School spawns one by default. 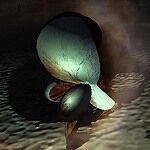