The Gravi is an uncommon artifact featured in all three S.T.A.L.K.E.R. games.

Can spot it near anomalies such as "Vortex" or in the hands of another stalker. While wearing it a certain amount of radiation is stored in the body while the rest of it is scattered in the radial direction away from the body. A good price.

The Gravi increases rupture protection by 3%, but increases radiation by 5%. The bonus granted by the Gravi is mediocre and it is best sold than used.

The Gravi is requested by Sakharov in his repeatable mission Find the "Gravi" artifact. The Combat Chaser is described to have a Gravi in the barrel, increasing the bullet's flight speed. [1]

The Gravi is spawned by most gravitational anomalies of the game, and can be commonly looted from Bandits rookies.

The artifact can be obtained as a reward for completing the following missions:

It can also be looted from following stashes:

The Gravi returns in S.T.A.L.K.E.R.: Clear Sky. It now increases weight capacity by a heavy +20kg, allowing the player to carry a lot more gear, although it is a radiation +3 artifact, requiring the use of a Wrenched to contain the radiation.

A Gravi can be found on the Great Swamp in an underground tunnel near the broken bridge to the upper left area of the map. In order to find the artifact, one will need a Veles detector, which is in the same tunnel but under a mattress and can be hard to notice, let alone, obtain.

Gravi is formed from metallic substances exposed to prolonged gravitation. This makes it capable of sustaining an antigravitational field, and many stalkers use it to reduce the weight of their backpacks. Emits radiation.

The Gravi may be found in gravitational anomaly fields; the Bitumen anomaly field in Yanov spawns one by default. 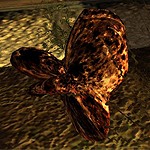 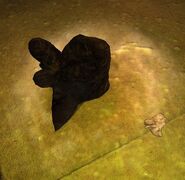 Gravi artifact in Call of Pripyat