Marshland
The Great Swamps are a location in Clear Sky. As the name implies, it is a huge marshland area and is situated just west of the Cordon.

The marshlands consist mostly of murky irradiated water and tall reeds, with thin passages of safe land stretching like labyrinthine bridges all over. A few abandoned buildings and settlements dot the landscape.

To the north lies the Agroprom Research Institute, just beyond the Hunter's Woods[1]. To the east lies the Cordon. And to the west, the mysterious Tuzla tunnel.

The Great Swamps are where the game begins in Clear Sky, with the player starting out in the base of the Clear Sky faction. It is also the field of battle between Clear Sky and the conquering Renegades.

The swamps were not always marshland. Before 1991, the area used to be a farming region, with villages and fields, several of which still remain in the area to this day. It was destroyed when the Soviet engineers, building a dam for the hydroelectric power plant nearby, flooded the area. Whether it was deliberate or an accident is unknown. What is known, however, that there were many casualties and the area was abandoned for years to come.[2]

The second Chernobyl incident, the birth of the Zone, has made the unpleasant experience of visiting the Swamps even more unpleasant. Apart from being almost completely inaccessible due to anomalies surrounding the area, it became a haven for renegades, bandits and mutants. Coupled with the amount of anomalies and irradiated swampwater, it was a location to steer away from.[3]

That is probably why Clear Sky chose this area as their base of operations. Its remote location and hostile inhabitants would protect them from other stalkers and keep their operations secret. However, all that changed with the great emission of 2011, the one that changed the Zone and made the anomalies that blocked off travel to the swamps vanish. Renegades moved into the swamps and started taking land from Clear Sky, killing their members. Members of this “faction” are little more than barely organized rabble; the Swamps are the lowest a stalker can go, so Renegades are a haven for degenerates of every kind. All types of people disappear into the swamps: random loners, outcasts from various factions, and just plain criminals.[4][5]

The marsh is a hostile area. Apart from Clear Sky stalkers and their camp, everything else is hostile: the Renegades are the only human enemies in the Great Swamps. The mutant presence includes blind dogs, boars, fleshes and the enigmatic marsh creature.

The marsh is not a completely new level. The first version was supposed to appear in Shadow of Chernobyl and was released with Build 1935. It is noticeably smaller (one sixth of the Clear Sky size), but still has noticeable landmarks: the Tuzla tunnel, bridge, hamlets, watchtowers, and, of course, the swamps. 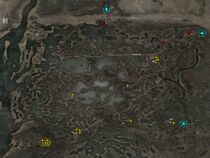 Map view of the Great Swamp.

Sunrise over the marsh

A church lays in the middle of the swamps 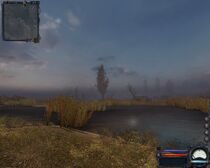 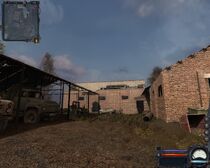 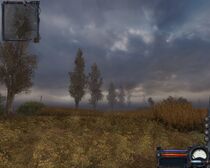 Close to the northern road 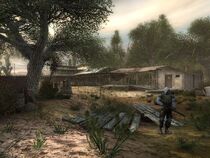 Clear Sky Base
Add an image to this gallery

Retrieved from "https://stalker.fandom.com/wiki/Great_Swamps?oldid=69842"
Community content is available under CC-BY-SA unless otherwise noted.