The weapon was cut from the final version of Shadow of Chernobyl. However, functional files - i.e. animations, model, stats - still exist within the game files, meaning one can spawn a functional HPSS-1m by numerous ways, such as making it available from traders, or spawning it in NPCs loadouts. It has a strangely high damage output, easily outclassing many weapons of the game, albeit possessing a low penetration capacity due to its caliber.

It deals the same amount of damage as all other 9x19mm pistols, however it shoots slower and has a smaller magazine capacity. The 13 round capacity is better than the 9x18mm pistols, but it is beat out by guns like the Martha and the Walker P9m. This makes the gun a generally average all-around pistol. It's nothing special, but is a noticeable upgrade from some of the first pistols the player encounters.

This weapon is carried mostly by experienced Loners, Bandits, and Renegades.

It can be acquired in the Cordon near the entrances to the Garbage, and more can be found in the Garbage.

The pistol shares the same upgrades as all pistols.

It is a good all-rounder, but other pistols are better at filling niche fields, such as the Black Kite for damage, the UDP Compact for rate of fire and damage, or the PMm for weight. The only thing where the HPSS-1M is best is its magazine capacity - after upgrade it's 17 bullets, which is the biggest from all pistols.

Not much has changed from its other appearances as far as specs go, but a noted concern is that since it shares ammo with the Viper 5 - if one carries both in their inventory they may find themselves abruptly out of ammo, a concern considering 9x19mm relative rarity. On the other hand, carrying the same type of ammunition for both weapons simplifies ammunition requirements and allows the player to carry more 9x19 mm ammunition when it may otherwise be taken up by another ammunition type. 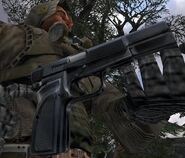 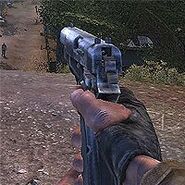 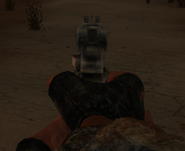 World model
Add an image to this gallery
Retrieved from "https://stalker.fandom.com/wiki/HPSS-1m?oldid=70562"
Community content is available under CC-BY-SA unless otherwise noted.