An ancient PMm received by Degtyarev as a reward for "Succesful execution of highly dangerous state orders, as well as valor and courage shown in the line of duty."

The Honorary PMm Pistol, called Commemorative PMm or Ceremonial Makarov in some translations, is a unique weapon featured only in S.T.A.L.K.E.R.: Call of Pripyat.

The player starts with this weapon in the inventory as their standard sidearm. Apart from the engraving, this weapon is twice as durable as a normal PMm, making it the most durable firearm in the Zone, both before and after upgrades.

However just like a normal PMm other stats are nothing to talk about, so it's up to the player whether to choose between utility and performance. 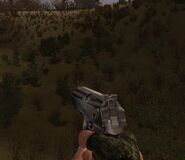 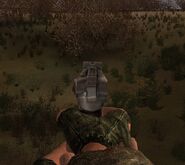