This extremely common over-and-under hunting shotgun can offer better protection against mutants than a pistol, thanks to its accuracy and stopping power. Used mostly by rookies on the outskirts of the Zone.

The Hunting shotgun was scheduled to appear in Shadow of Chernobyl, but was cut from the final version. However, resource files - including weapon configs, model and animations - still exist within the game files, meaning one can spawn one with the use of modifications. For some reason, it has a ridiculous damage output of 150 per shot, which is even higher than the damage dealt by a Gauss gun shot, easily making it the most powerful non-explosive weapon.

There are several ways the player can spawn the weapon - either by spawning it in the loadout of randomly-spawned NPCs or making it available from traders.

The Hunting Rifle is one of the first seen and most common weapons in the entire game. It is similar in use and performance to the Shotgun; it trades slightly lower maximum potential damage and handling for a sizable increase in accuracy and range. It uses all forms of 12 gauge ammunition (shotgun shells, slugs, darts), and carries up to two rounds at a time. It is an extremely cheap (most pistols are worth more) and a common weapon.

As an early game weapon it is quite accurate and dependable when firing slug and dart rounds at short to medium range, provided the weapon's iron sights are used correctly and the operator adjusts for bullet drop. With its 1000 RPM firecap, one can fire both barrels nearly at once.

When fully upgraded, the Hunting Shotgun is amazingly accurate. The only drawback being not able to use buck shot, however the accuracy with slug shot or dart shot overpowers this drawback, although one can prevent this by not installing the Tier 3 "Threaded barrel" upgrade but note that this will limit the gun's full potential.

It is usually found in the hands of rookie Loners, Bandits, Renegades, and Clear Sky members.

Generally speaking, much better shotguns can be obtained from dead stalkers (Chaser 13), found in stashes (SPSA14) or ordered from Nimble (Carabiner, Eliminator), and even the sawn-off shotgun is more efficient with buck shot. It is not without its niche however – if the player likes the 12x76 Slug, the Hunting rifle has best accuracy rating of all the shotguns, which can be further dramatically increased with the Tier 3 "Threaded barrel" upgrade; this upgrade also increases bullet velocity by 100m/s. While the two-bullet capacity is a downside, it can fire from both barrels at once, putting it above the Lynx in burst damage. Ultimately, the biggest problem with long range combat is the lack of attachable scope and proper iron sights which means the player needs a good eye and a steady hand to use it effectively, as the long reload time will be unforgiving to any mistakes.

The Hunting shotgun in Shadow of Chernobyl

The Hunting shotgun in Call of Pripyat 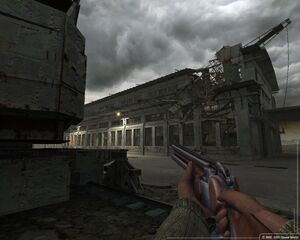 TOZ - 34 at Garbage in the early stages of development.