Edit
watch 02:46
The Quarry - The Loop
Do you like this video?
Play Sound

After the British army replaced this rifle with the German-made GP 37, it appeared in large quantities first on the black market and then in the Zone. The IL 86's main advantages are a standard 4-x scope and the high accuracy of the first shot. In burst mode, its accuracy decreases greatly, and the main mechanisms of the rifle are not reliable enough.

The IL 86 is slightly less accurate than other assault rifles like the TRs 301 and the SGI-5k, and is the heaviest assault rifle available (weighing it at 5.0kg unloaded) but sports above average durability despite jamming commonly after the condition drops below 70%, and damage compared to the equally available TRs 301.

The IL 86, with its integral SUSAT scope, is likely to be the first scoped weapon the player comes across. It can first be obtained by buying it at the Bar. Additionally it can also be looted from a body in Lab X-18 during the following special mission in the Dark Valley. However it is also possible for the player to obtain a scope for the Obokan even before that when entering the Dark Valley, which results in a better weapon than the IL 86, being lighter and more accurate. The required 5.56x45mm ammunition for the IL 86 is also rare in the Dark Valley, while there will be plenty for the AC-96/2. Therefore the IL 86 is less useful at this part of the game.

A gun in good condition can be looted from a body in Lab X-18. Besides that it is often used by stalkers from Ecologists faction. Mostly:

This weapon is also used in small numbers by many other factions, including:

Professor Sakharov in Yantar, and Barkeep in the Bar area sell this weapon.

The IL 86 is still primarily used by experienced and veteran loners and Freedom members and a few Mercenaries. The IL 86 performs somewhat poorly compared to other assault rifles as it has slightly inferior handling and accuracy, is heavy (5.0kg unloaded) and is prone to jamming when worn. On the other hand, it has higher damage than the TRs 301 and is cheaper, while its integral SUSAT scope is also a plus.

Despite its cost and capabilities, it is a sadly unreliable weapon, highly prone to jamming in tight situations. A recommendation is to upgrade its scope and use it as a snipers weapon against soft to medium targets. Its counterpart the TRs 301 is a better choice compared to the IL86 due to extensive upgrade capabilities, along with the ability to upgrade with a grenade launcher, scope and silencer. The TRs is a better choice as an assault weapon.

A good configuration for any player versus Bandits, Duty, Freedom or Loners, is the IL86 with accuracy and marksman upgrades for sniping, the TRs 301 for large groups or tight quarters.

This rifle's considerable number of drawbacks caused most of these weapons to be modernized, with the retired stock making its way to the Zone via the black market. The rifle's main advantages are its built-in 4x scope, high single-shot accuracy and reliable upgrade technology. When the weapon is fired in bursts, its accuracy decreases significantly and the rifle's basic internal mechanisms become somewhat unreliable.

The IL 86 appears again in Call of Pripyat, available from early game Loners, Freedom stalkers, some mercenaries, right through to late-game Monolith stalkers. Its scope zoom cannot be reduced in Call of Pripyat, only increased from 1.4x to 4x. It's a decent weapon early and late in the game with its expandable scope that easily makes it a good sniper weapon, even though it is not very accurate without modifications, and stock scope that gives it decent CQB performance along with fairly good stats, though still offset by its weight of 5.00kg and its relatively low reliability.

Its effectiveness is highly questionable. The TRs 301 features overall better stats, the SGI-5k is better in all points except the attachments selection (it can only mount an M203 grenade launcher, whereas the IL 86 has a built-in scope and can be upgraded to sport a suppressor), and rarer weapons like the GP37 are simply better. On the other hand, the IL 86 is fairly effective as a sniper-like weapon as it features a built-in scope (that can be improved with upgrades), and is relatively a high damage and accurate weapon. It is worth using as a 5.56 rifle in the early game, though the player should look for replacements as soon as possible.

At the beginning of the game it can be best weapon available to player in Zaton thanks to its built-in scope and better accuracy than Warsaw Pact weapons (especially after tool- and vodka-less upgrade for accuracy). One of the upgrades features the ability to change its caliber to 5.45×39mm rounds which is quite an advantage, as after going through stashes and looting the military gear on the Preobrazhensky Bridge, the player can easily salvage about 1000 5.45 rounds.

While it still sports horrendous performance when damaged like its previous incarnation, its upgrade tree is now focused in turning it into the revised L85A2 as its durability can be increased by 75% in total when all of the durability options are installed. It can be modified to have ability to mount a silencer and it cannot mount a grenade launcher in any way. It is also an effective early game sniping weapon as it is the only rifle that can fire 5.45 rounds and use a silencer. The Storm can also equip a silencer and a scope while chambered to fire 5.45 rounds, but it has substantial bullet drop which makes long range aiming problematic unless fully upgraded.

The scope zoom can be increased and also given high contrast and later variable zoom.

It is worth noting that the IL can only play role as sniping purpose assault rifle because it doesn't have any upgrade for either limiting its weight, adding ability to mount a grenade launcher or increasing rate of fire.

Overall, despite having worst performance and being heaviest from all NATO weapons, it can be the best 5.45 weapon available to player unless they manage to acquire the Storm from Nimble. 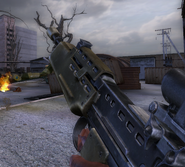 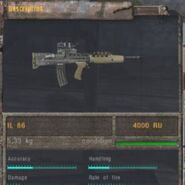 Weapon's world model as seen in all games.