An Izlom is a mutated human that was supposed to appear in S.T.A.L.K.E.R.: Shadow of Chernobyl.

An Izlom walks upright like most humanoid mutants, but will run on all fours when attacking. It has one arm much longer than the other arm and has a very long neck. Izloms are not aggressive, they tend to avoid engagement with stalkers. They rarely attack unless one is very close to them, when they do attack they are quite fearsome with maddening zombified moans and they use their large arms to both block and beat the target up. Izloms appear to be neutral with Snorks and Burers, but hostile to Bloodsuckers.

The creature does not appear in any S.T.A.L.K.E.R. game. Its concept was abandoned by game developers in the early stage of game development, but several game assets were retained inside game data archives, so modders were able to recreate the mutant for the original game. They are referred to as "Fracture" in game scripts.

An Izlom in Zaton (Via Modding) 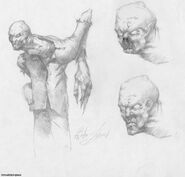