A large, sprawling complex to the south-east of Yanov, the Jupiter Factory is a former industrial complex that was used to manufacture Product 62 (AKA the Gauss rifle) and Monolith beacons following the emergence of the Zone. It was eventually abandoned, with nearly all valuable equipment moved via the Pripyat-1 underpass.

In 2012, it is where one of the Stingray helicopters crashed and the focal point of several missions for Major Degtyarev. The player will need to visit the complex's separate structures to complete quests.

The area contains a scripted group of bandits on the west side of the plant near the Concrete Bath Anomaly, camping near a bridge. They are always hostile and will open fire once spotting the player. Jupiter is also populated by several blind dogs, a couple of pseudodogs, and, during one mission for the scientists, a group of hostile mercenaries. Jupiter factory holds an entrance to the Pripyat Underground.

Interestingly, Jupiter was apparently planned to be included in S.T.A.L.K.E.R.: Clear Sky. In the textures/map folder there is a file called map_jupiter.dds, which contains a work-in-progress map of the Jupiter factory and its surroundings. It includes a preliminary version of the factory that appears in S.T.A.L.K.E.R.: Call of Pripyat as well as several locations marked with blue and yellow dots. Two locations are named - one of them is called container storage, just like the location appearing in Call of Pripyat. 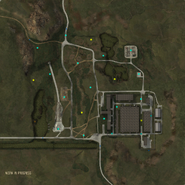 The Jupiter plant in real life

Stingray 4 inside the Jupiter Plant