An improved version of a classic automatic pistol, which passed all the major armed conflicts of the 20th century with flying colors and entered the new millennium with confidence. Produced by dozens if not hundreds of arms manufacturers around the world in both standard and modified configurations. The weapon's only drawback, its mediocre magazine capacity, is largely compensated by the hard-hitting ammo it uses.

The Kora 919 is a good upgrade from the most of the nine millimeter pistols in the early game, since it fires more powerful .45 ACP bullets. However, of all the .45 caliber handguns it has the lowest damage rating, is the second heaviest and lowest accuracy of them all (the first of both being the Black Kite), but has the highest rate of fire and being the most durable of all of them. It is also the cheapest .45 caliber handgun available. It also has the drawback of only holding seven bullets per magazine, making reloads very frequent.

In the patched game the weapon can be bought from Barkeep from the starta.

The Chest in the stairwell in Agroprom contains one with some regular ammo.

Either due to its unpopularity or an oversight on the developer's part, stock Kora 919s are never used by stalkers, as they usually prefer UDP Compacts and SIP-t M200s.

In Clear Sky, the Kora now has its stats increased for the better, it's now one of the most accurate pistols in the game while still having very favorable stopping power and handling, although still offset by its small 7-round magazine.

The earliest way to get this pistol is by buying it from Sidorovich, but as an alternative method of getting this weapon for free quite early in the game, the player can either:

It can be also retrieved from the following stashes:

Some experienced and veteran Loners carry this weapon as a sidearm with upgrades, but Monolith veterans are known to use this as their standard issue sidearm.

In Call of Pripyat, the Kora is the worst .45 pistol in the game, regaining its status back in Shadow of Chernobyl. The Kora now has poor handling, high recoil, can no longer mount a silencer b, 7 round magazine capacity and below-average stopping power and accuracy along with the weight of 1.00kg unloaded makes it a pain to use, even when modified to Tier-3. Its only redeeming quality is its above average durability than most .45 pistols by default.

Generally speaking, more effective .45 caliber pistols: SIP-t M200, UDP Compact and the Black Kite can be acquired a little earlier in the game and Nimble can provide custom versions of the same caliber for a small fee of 3500RU. Owl and Hawaiian will occasionally stock this handgun but can be easily salvaged from dead stalkers, given their widespread nature.

Loners, Bandits, and Zombified Stalkers carry this most often as a sidearm. Less common among higher-ranking Freedom and Duty members, who favor the UDP Compact as their sidearm of choice. 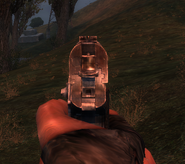 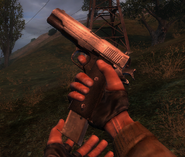