Edit
watch 02:52
Roblox: DeepWoken - The Loop
Do you like this video?
Play Sound
"Dead Cities Pt. 2"

Lake Yantar
Lab X-16 is a secret laboratory built near Lake Yantar prior to the 2006 incident.

X-16 focused on researching one of the side discoveries of The Group's research: that living creatures are able to generate directed psy-emissions. A biological field emitter, essentially a giant brain, was grown as part of the research, using equipment from Lab X-18.[1]

The lab is located beneath the factory complex at Lake Yantar, in a secure underground bunker, sheltered from the outside world. Its structure is fairly uncomplicated, with the main, circular chamber (resembling the shape of a silo) housing the emitter's mechanisms; and the access halls and research facility, where test subjects were kept for study.

Originally, X16's psy-emitter was called the "Miracle Machine" because it created small scale emissions, though they were not lethal to anyone distant from the factory complex. As a result of a malfunction in its cooling system, the emitter began to create uncontrolled emissions. This caused anyone who was unlucky enough to be caught there while salvaging equipment near it to turn into Zombified Stalkers, wreaking havoc in Yantar.

A stalker team that worked for Sakharov discovered that the emissions were caused by the faulty cooling system. They also discovered that it was cooling an unidentified device located under the complex. This led to the discovery of lab X-16. With this information, Sakharov was able to discover that the cooling device could be repaired from outside lab X-16. He sent Scar and the stalker group led by Lefty to battle the hordes of zombies in the complex and repair the cooling system.

In Shadow of Chernobyl, X-16 was raided by Vasiliev and Ghost, one of Strelok's companions, before the Marked One's arrival. He proceeded inside to retrieve a few documents from Ghost, and had to turn off the lab's psy-emitter - the "Miracle Machine" - to proceed safely, recovering more of his lost memories when the final plug was pulled. By then, the laboratory was littered with a multitude of small fires (some with bones among the wood), dead and mutilated corpses of stalkers in various states of decomposition, the freshest of which are of Military personnel and the Monolith faction, which indicate a fierce battle was fought inside not too long before. It was inhabited by a large number of Zombified Stalkers, some Snorks, and a single Controller, who killed Ghost. The only exit from the lab (as the elevator near the entrance is deactivated and the ladders close by are broken and can't be reached from the bottom) is a structural fault in one of the basins of the Controller's den that leads to a large drainage tunnel network with a manhole access to the surface, which the Marked One used to escape.

The lab contains primarily Zombified Stalkers, Snorks, and a lone Controller. While escaping out of X16 you will meet a Pseudogiant in the underground tunnels.

Originally, X16 was one, big underground part of the Yantar level, as featured in Build 1935. The same went for Agroprom Underground, however both were soon separated, and became their own levels.

The nearby factory complex.

The lab holds many bodies of former Stalkers and Military personel. 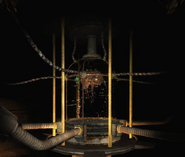 The source of the emissions at Yantar, a giant brain like creature in a stasis pod.