Secret laboratory
X-18 is a secret laboratory located underneath the Dark Valley. It has a reputation as being one of the most terrifying (and most dangerous) locations in the series.

X-18 is a laboratory that was used to study the effects of psychic radiation (based on the informational field, noosphere) on living cells using Kaymanov emitters. It was set up in the wake of the 1986 disaster. Mutations of living beings following exposure to these emissions is meticulously noted.[1][2]

In one of the last experiments, mutations involved hair loss, aggression, etc.[3] Eventually, subjects stabilized, with only 10% of their hair remaining and substantial growth of claws and teeth. Bursts of seemingly random activity were present, but not directed at their peers, leading to speculation on an increase in intellect. Thus, the second stage of the experiment with a new modulation of psi-emissions was authorized.[4] Security incidents took place, as the aggressive subjects were prone to causing damage when prompted to by researchers or security guards.[5] In one heinous instance, two dozen test subjects broke out and vandalized the main experiment area and forcing the researchers to lock down the lower levels. The security team had to respond with force, suffering minor wounds.[6] The final experiment concerned the use of new psi-emissions on test subjects, which ended with their brains roasted. The experiment was considered a success and led to experimentation on larger creatures. [7]

The end of the laboratory came when, after receiving too much radiation, an experiment broke out and destroyed most of X-18 (it did this by opening all the other containers and releasing the previous experiments). The surviving staff members locked themselves out of the main hall by a series of large coded doors. Eventually, their experiments reached them through the piping, and killed them off. Later, Stalkers began venturing into the laboratory for any treasures that may remain there. Few survived, many died from shock, while others were at the mercy of the Poltergeists.[8]

Borov, the bandit leader in Shadow of Chernobyl, discovered that the door may not have been locked, he then proceeded to lock it, keeping what treasure may be inside safe for him to collect at a later date. Borov was always too afraid to enter the lab after locking it, thus it remained locked until the Marked One unlocked it, using the keycard he recovered from Borov after killing him.

X-18 also helped in the creation of the Brain Scorcher, which is located in the Red Forest.

An attacking Snork in the lab. 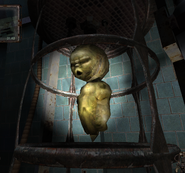 What appears to be a embryonic form of a Poltergeist.